There were two near-takeovers at the Emmys on Monday, as streaming services expanded their impact on the awards, while "Saturday Night Live" permeated the ceremony.

The former likely magnified the issue of viewers watching a parade of winners from relatively little-seen programs — with "Game of Thrones" a notable exception — and the latter yielded a flawed, haphazard show, which badly overplayed some of its bits.

Commemorating the 70th Emmy Awards presented opportunities for nostalgia, and the show had one of those spontaneous moments that producers live for, as Glenn Weiss — honoured for directing the Oscars — proposed to his girlfriend from the stage.

All told, though, there was simply too much "SNL," past and present, as if producer Lorne Michaels — overseeing the telecast for host network NBC — could scarcely be bothered to reach beyond his comfort zone.

As a consequence, the breezy tone and ebullient moments — which began with a promising song-and-dance number about strides in diversity within the TV industry, cheekily titled "We solved it" — gave way to lethargy and clunky ones.

Foremost among the misfires was a recurring gag featuring Fred Armisen and Maya Rudolph that fell woefully flat — like one of those sketches that "SNL" reserves for the last 15 minutes. 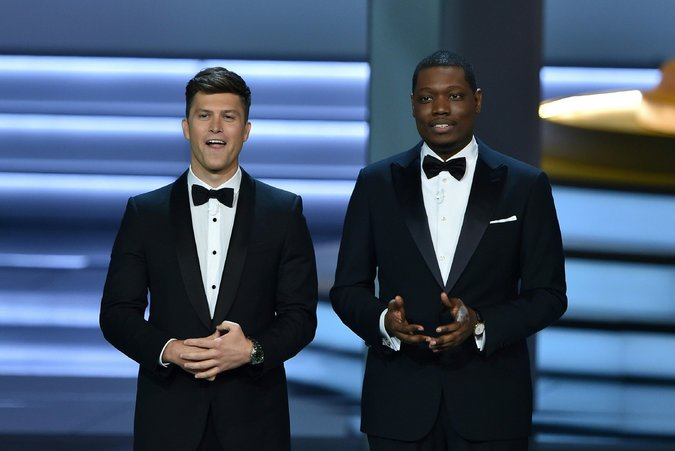 Hosts Michael Che and Colin Jost filled their opening and indeed much of what followed with a surplus of insider-ish jokes, about everything from sexual harassment to recent low ratings for the Emmys.
While there were a few barbs (inevitably) at the Trump administration's expense, much of the politically tinged humor dealt with race, from Che's "Reparations Emmys" segment — giving awards to African-American actors from old TV shows — to his wry aside that "The Handmaid's Tale" was really "'Roots' for white women."

Even the song and dance nearly backfired. After celebrating that this year featured the most diverse lineup of Emmy nominees ever, the first batch of winners were predominantly white.

African Americans had actually swept guest acting categories at the earlier Creative Arts Emmys, but by the time Regina King and Thandie Newton were recognized, presenter James Corden felt inspired to joke about an #EmmysSoWhite hashtag. 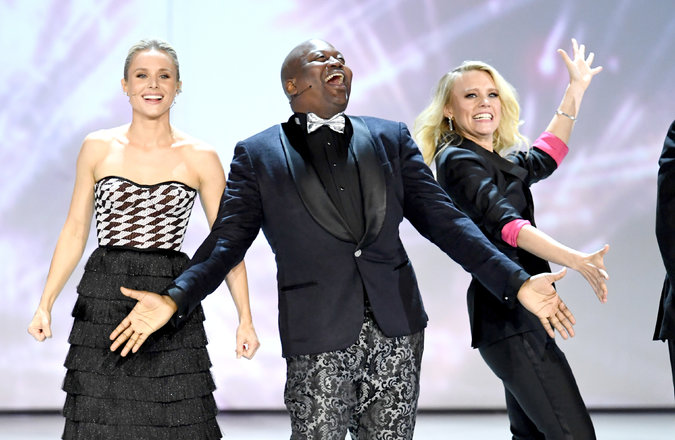 That almost obscured a strong showing for LGBTQ-themed content, including FX's "The Assassination of Gianni Versace" and "RuPaul's Drag Race."

Structurally, the producers stuck to the logical approach of breaking down nominees by genre, which continues to make sense. That said, the presenter banter was often painful, making a case for trotting out fewer celebrities and then actually giving them time to do or say something.

The show did provide some winning moments of nostalgia and sweetness, with one of the best on both scores kicking off the festivities: Henry Winkler winning his first Emmy — after six nominations dating back more than 40 years — for the HBO comedy "Barry." Acknowledging Betty White provided a similar tingle, more so because they were so few and far between. 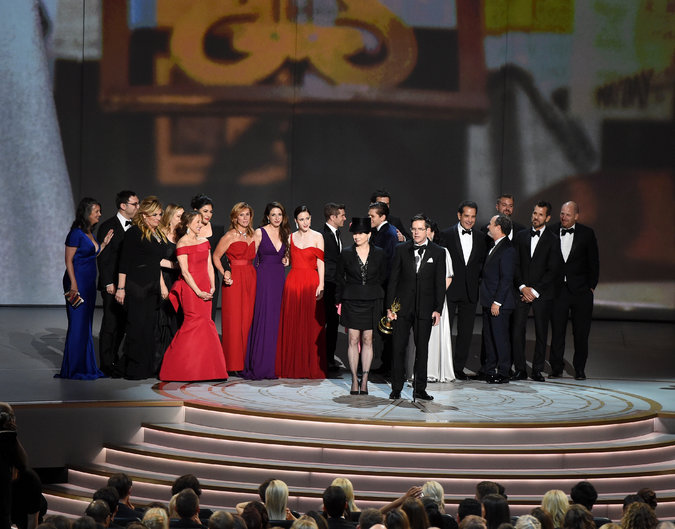 Netflix, which for the first time surpassed HBO in total nominations, left its mark on the ceremony, winning seven awards Monday (and tying HBO overall, with 23 each for all the award ceremonies). But Amazon also made its presence felt by nearly sweeping the comedy balloting for "The Marvelous Mrs. Maisel," leaving Hulu – thanks to "Thrones" regaining its throne — as the odd streamer out.

HBO and FX walked away with six and five awards, respectively, which kept streaming services from being the night's big story.

The lone broadcast winners for the night, by contrast, were the aforementioned Weiss for ABC's Oscarcast and "SNL," prompting Michaels to note in his acceptance speech that NBC is still alive and kicking, 43 years after the late-night staple made its debut.

The Emmys, it's worth noting, aren't eligible to win Emmys. And even if they were, this year's show — its highlights notwithstanding — certainly wouldn't be a candidate to land one.