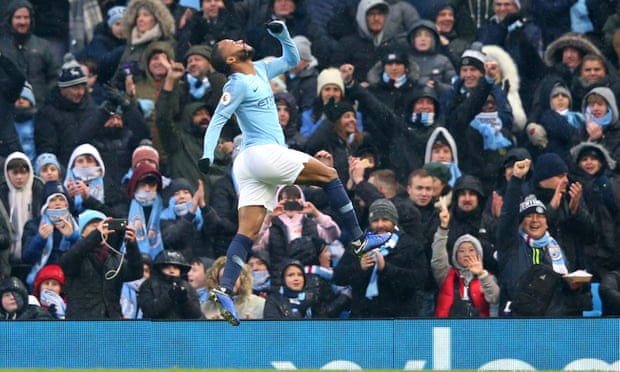 Manchester City returned to the top of the Premier League as two goals from Gabriel Jesus and another by substitute Raheem Sterling secured a 3-1 home win over Everton.

They went in front after 22 minutes when Yerry Mina gave the ball away inside his own half and Fernandinho played it to Leroy Sane, whose pass put Jesus clear inside the penalty area to finish low past Jordan Pickford.

It took only five minutes of the second period for City to double their lead, Sane crossing for Jesus to power in a header — but with 65 minutes gone Everton were back in the game when Lucas Digne's cross was headed home by Dominic Calvert-Lewin via an inadvertent touch from Fabian Delph.

But City brought on Sterling for Sane and, after 69 minutes, the substitute restored his side's two-goal cushion when he headed in Fernandinho's cross.

City almost had the first opening after just a couple of minutes when a risky Andre Gomes pass was close to being intercepted by Jesus.

Tottenham grabbed a stoppage-time winner as they beat Burnley 1-0 after what had seemed set to be an afternoon of frustration at Wembley.

Spurs, fresh from the draw at Barcelona that secured their Champions League qualification, dominated the early stages and were almost rewarded when Eric Lamela shot just wide of the post.

Dele Alli had a strike blocked by Ben Mee as Burnley dug in, and Lamela had another attempt blocked soon afterwards, but Burnley had a chance early in the second half when former Spurs winger Aaron Lennon set up Ashley Barnes only for Toby Alderweireld to produce a good block.

With five minutes to go, the home side had another great chance to take the lead only for Son Heung-Min to steer an attempted finish across goal, and then Alli was denied by Phil Bardsley's block — but Eriksen would not be denied after Harry Kane had set him up at the near post.

Watford held on to beat Cardiff 3-2 at Vicarage Road in an open game that was illuminated by some outstanding goals.

Cardiff thought they should have had an early penalty when Josh Murphy went down in the area but the referee waved play on, and in the pouring rain they were soon behind when Gerard Deulofeu's weaving run into the area after 16 minutes ended with a cool low finish into the corner.

Harry Arter fired wide with a difficult half-chance as the visitors went onto the attack looking for an equaliser, but before half-time Roberto Pereyra had a chance to double the lead only to be denied by a good save from Neil Etheridge shortly before the break.

Etheridge repeated the trick when Pereyra threatened in the opening moments of the second half, but he was beaten again when Jose Holebas struck in style, bending a finish into the top corner.

The home side looked to have sealed the points with another superb goal, Domingos Quina sweeping home a fine finish — but then Junior Hoilett pulled one back for Cardiff with yet another top-quality strike and, moments later, Bobby Reid scrambled home to leave the game in the balance.

Early and late goals on a rain-drenched afternoon were enough to give Wolvesa 2-0 win over Bournemouth at Molineux.

In an open start, visitors Bournemouth threatened first when Josh King found space but was denied by a good challenge from Kieran Gibbs-White.

But it was Wolves who went in front with 12 minutes on the clock, Raul Jiminez converting when Diogo Jota's scuffed shot fell to him following a Charlie Daniels mistake.

Wolves should have doubled their lead when Gibbs-White put Costa away down the right and he raced into the area only to slice his effort off target, and after Junior Stanislas had hit the bar with a free kick from the edge of the box, Ivan Cavaleiro wrapped up the points.

Newcastle bounced back from last weekend's defeat to Wolves with a 1-0 win at Huddersfield.

In difficult conditions, Huddersfield fashioned the first chance when Laurent Depoitre just failed to connect with a dangerous cross at the far post.

Fabian Schar had a strike stopped by Jonas Lossl as Newcastle flickered into life, but it was a game of few chances and another went begging when Kenedy thrashed an effort high and wide.

But Newcastle made the breakthrough with 55 minutes gone, Salomon Rondon rounding off a superb end-to-end team move when he finished off Javier Manquillo's pass.

Crystal Palace secured a 1-0 victory over Leicester at Selhurst Park as they found a way to win without suspended star man Wilfried Zaha.

The Foxes felt they should have had the lead with the half-hour approaching, Jamie Vardy adjudged to have fouled keeper Vicente Guaita before dispossessing him and firing the ball home.

Palace took the lead five minutes before half-time, Luka Milivojevic sending a dipping strike into the corner past Kasper Schmiechel, but Leicester began the second half strongly and could have levelled when Rachid Ghezzal steered a first-time finish narrowly wide.

But Vardy was within a whisker of levelling when Guaita got a crucial touch to turn his shot against the inside of the post.