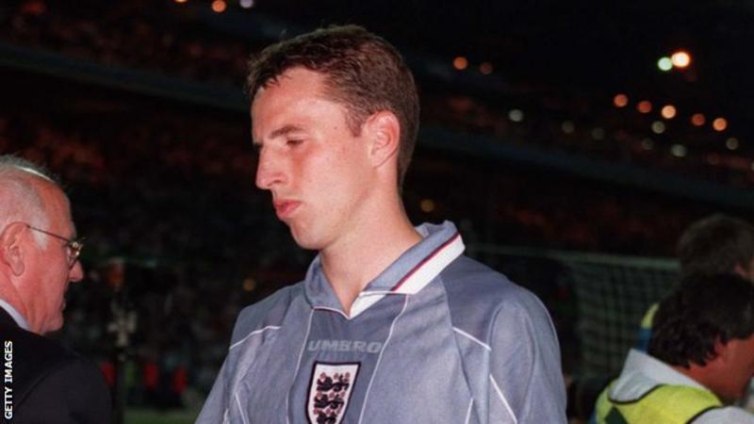 England’s Euro 2020 last-16 tie with Germany on Tuesday is an opportunity for his team to “make some history”, says manager Gareth Southgate.

Southgate hopes to guide England into the quarter-finals after reaching the last four of the World Cup in 2018.

He is keen for his players to write a new chapter into the England-Germany rivalry, with several of them too young to remember some previous key meetings.

“The game is probably worthy of more than the second round stage,” he said.

“But then so is Belgium against Portugal and one or two others.

“It’s a great opportunity for this team to make some history and give people memories of England-Germany fixtures for the future, that are a little different to some of the ones they’ve been flooded with over the last few days which mean absolutely nothing to them because they weren’t born.”

England are aiming to secure a first major tournament knockout-stage victory over Germany since 1966 when they take on Joachim Low’s side in front of an expected 40,000-strong Wembley crowd.

Germany have won all four knockout matches between the teams since losing the 1966 World Cup final at Wembley.

Those wins include penalty shootout triumphs at the 1990 World Cup and Euro ’96, plus the controversial 4-1 last-16 victory at the 2010 World Cup when the officials failed to spot Frank Lampard’s shot crossing the line.

And Southgate admits the idea of extinguishing some of the pain from recent meetings with the Germans is a source of motivation ahead of Tuesday.

“We’re playing against a very good side. You hear about Germany being this and Germany being that and then you look at the team sheet and see four World Cup winners and about six Champions League winners, so huge big game experience,” he added.

Part of England’s preparations involve readying themselves for a possible penalty shootout and Southgate, who missed a crucial spot-kick in the Euro ’96 defeat at Wembley, insists his squad have prepared “as thoroughly as we can”.

“We did for the World Cup, we did for the Nations League and obviously we won those two shootouts [against Colombia and Switzerland] so we’ll be thoroughly well prepared in the big tournaments and the big matches.”

The England boss will also make a late decision on the fitness of Chelsea duo Mason Mount and Ben Chilwell.

Mount and Chilwell missed the win over the Czech Republic having come into close contact with Scotland’s Billy Gilmour, who tested positive for Covid-19 after the Scots’ Group D draw with England on 18 June.

“They are only allowed into certain elements of the training so they can’t take part in anything where the full team is training and tackling and those sorts of things, so that is limited,” said Southgate.