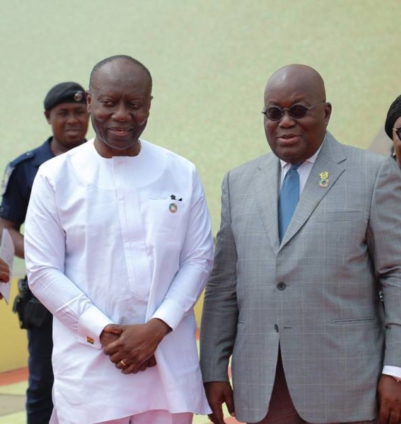 President Akufo-Addo has announced that, the Finance Minister, Ken Ofori-Atta, will address the nation on Thursday, March 24, on measures instituted by government to resolve the current economic challenges in the country.

He made this revelation, during an interaction with members of the Council of State at the Jubilee House on Tuesday.

According to the President, the Finance Minister’s address will highlight the outcome of deliberations that took place during cabinet’s weekend retreat.

The crunch meeting discussed the current fiscal hurdles in the country and how to resolve them. Akufo-Addo said the measures to be announced will go a long way to calm public anxiety regarding the country’s economic fortunes.

“Our retreat which you referred to is in some way quite timely, because as a general rule, we have retreats each year on a quarterly basis, and this is the first one for this year. Fortunately for us, it coincided with these difficulties, and the public anxiety about the way that the economy was going. It gave us therefore the opportunity of the three days to look in-depth at where the economy was headed, and what measures were necessary to be taken.

Some parts have apparently gone before the country, but the decision was that the Minister for Finance, on my instructions, is going to have a major engagement with the nation on Thursday, where he is going to be in a position to lay out specifically, the measures we’ve taken and we intend to take, to correct, as it were, put the ship of state, steep on a better keel”, President Akufo-Addo stated.

It will be recalled that, amidst the depreciation of the cedi and the recent increments in fuel prices, government held a crunch cabinet meeting to find solutions to the raging economic challenges.

The deliberations were led by President Akufo-Addo. It was attended by all NPP MPs, ministers, government appointees, and the governing New Patriotic Party (NPP) leadership. The meeting discussed whether government should continue to push through with the E-levy Bill or resort to the International Monetary Fund (IMF), in the face of the current fiscal hurdles.

After proceedings, Information Minister, Kojo Oppong Nkrumah, revealed that all 16 flagship programmes of government will soon be reviewed to ensure their objectives are well achieved.

His outfit also announced that the Finance Minister will soon address the country on the fall-outs of the meeting; a date which has now been announced by the President on Tuesday.

Meanwhile, Ghana’s current public debt stock stands at a staggering GH¢341.8 billion with a corresponding debt to GDP ratio of more than 77% as of September ending 2021.

This means if the country should share this amount across the country’s 30.8 million population, everyone will owe approximately GH¢11,000.

In the first quarter of 2022, government has indicated that it will borrow a total of GH¢24.5 billion from the domestic market of which GH¢20.7 billion will be used to service existing debt in the local market, leaving government with just GH¢3.8 billion to finance other expenses.

DISCLAIMER: The Views, Comments, Opinions, Contributions and Statements made by Readers and Contributors on this platform do not necessarily represent the views or policy of Multimedia Group Limited.
Tags:
Akufo-Addo
Economy
IMF
Ken Ofori-Atta
Kojo Oppong Nkrumah