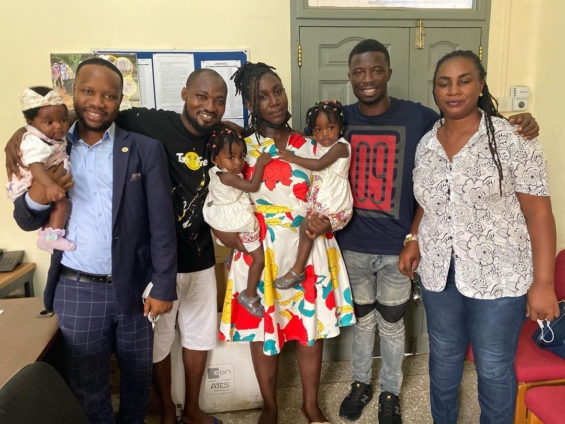 The family of comedian Funny Face has accused actor Kwaku Manu of taking advantage of their relative and profiting off his plight.

Speaking on Peace FM, sister of Funny Face, Lydia Boateng, claimed Kwaku Manu was not the architect behind the actor’s reunion with his wife.

She stated that Kwaku Manu drove Vanessa and her three kids from Kumasi to Accra to see Funny Face so he could take credit for the visit.

Madam Lydia also accused the Kumawood actor of making a video of the trip and the visit to monetise it on YouTube.

She asked Kwaku Manu to pull down the video and stay out of the family’s business. She said the family will report the actor’s channel if he fails to do so.

This comes after Funny Face was reunited with his daughters and their mother Vanessa.

Kwaku Manu and Funny Face’s lawyer were also present during the visit.

Meanwhile, Kwaku Manu has rubbished the family’s claim and questoned their sudden interest in the actor’s welfare.

He called out the family for abandoning the actor while he was going through tough times.

The Kumawood actor said he helped Funny Face because he believes he is a good man and deserves all the help he can get.

He added that many celebrities facing difficult issues are unable to receive help from colleagues because of setbacks and criticisms like these.

DISCLAIMER: The Views, Comments, Opinions, Contributions and Statements made by Readers and Contributors on this platform do not necessarily represent the views or policy of Multimedia Group Limited.
Tags:
Accra Psychiatric Hospital
Funny face
Kwaku Manu