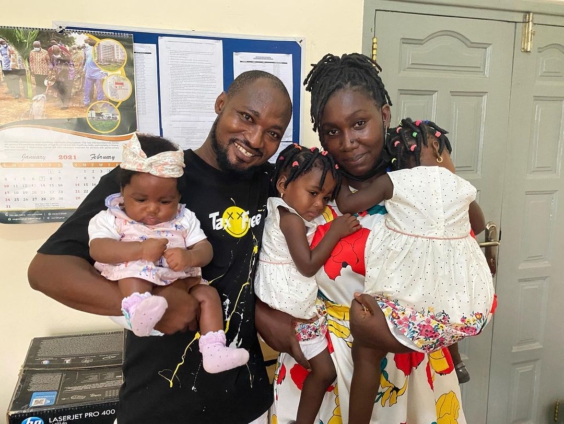 Comedian Funny Face has been reunited with his daughters and their mother only known as Vanessa.

The young lady paid a visit to the Accra Psychiatrist Hospital where a judge has committed him for two weeks after he appeared in court for unlawful discharge of firearms.

In pictures that have gone viral, Funny Face was seen all smiles holding on to his kids and baby mama.

The visit was supposedly facilitated by actor Kwaku Manu who has vowed to bring the couple back together to resolve their issues.

Speaking in an interview, Vanessa said that although she was initially sceptical about the visit she realised Funny Face was truly remorseful and has therefore forgiven him.

Funny Face and Vanessa had been at each other’s throat since 2020.

Although the couple seemed to have settled their issues after Funny Face promised to marry her, they had yet to meet to discuss the details of their marriage.

Vanessa said in the interview that after seeing Funny Face at the Psychiatric Hospital, she felt the need to forget the past and move on.

She said that it is important she fixes her relationship with Funny Face so their children can continue to share a bond with their father.