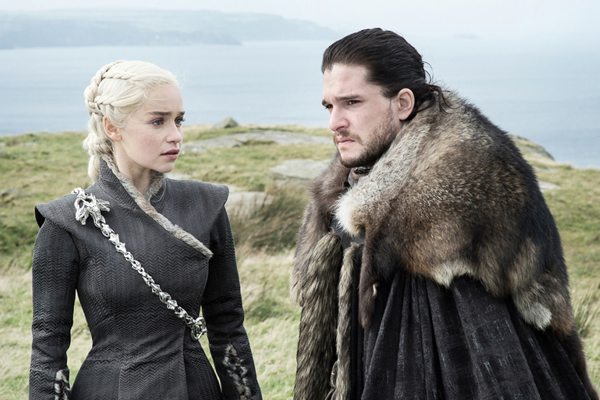 Winter has finally come for Game of Thrones – and its last series is getting a chilly reception.

A petition calling on its makers, HBO, to redo season eight has been signed by more than 500,000 disgruntled fans.

The latest series of the popular show – based on George RR Martin’s books – has faced a barrage of criticism online.

Disappointed viewers have taken umbrage with the show’s narrative structure and the fate of beloved characters.

The Change.org petition, launched after this week’s penultimate episode was aired, goes further by demanding a complete do-over “with competent writers”.

It argues that the show’s writers, David Benioff and DB Weiss, “have proven themselves to be woefully incompetent”.

The writers, the petition charges, have “no source material to fall back on”, alluding to the unfinished books season eight is loosely based on. 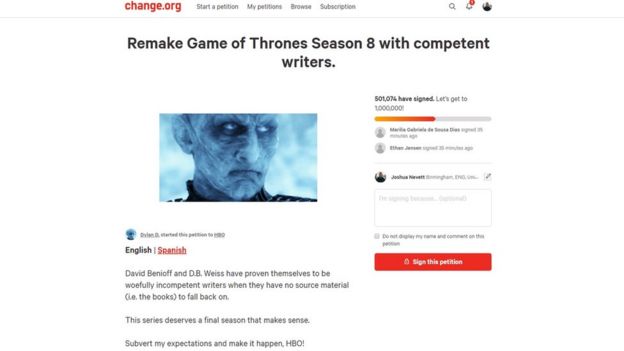 The Change.org petition has amassed more than 500,000 signatures

Because Mr Martin’s next book, The Winds Of Winter, is still a work-in-progress, the TV series has a different ending.

“This series deserves a final season that makes sense,” the petition reads. “Subvert my expectations and make it happen, HBO!”

Those who signed the petition left comments saying the final series “seems rushed”, “totally disrespected the author” and threw eight years of character development “down the drain”.

“The season demolished everything that was built throughout the series, as a result of rushed storytelling, poor character development, and overall lack of care,” one signatory wrote. 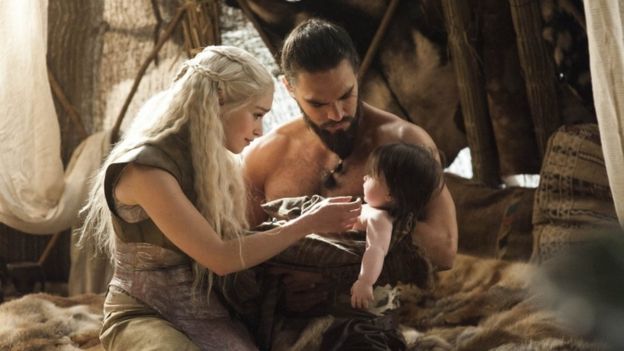 Emilia Clarke as Daenerys Targaryen and Jason Momoa as Drogo

Given the reported cost of each episode – an estimated $15m (£11.7m) – HBO is unlikely to cave into the petition’s demands.

And ultimately, staggering numbers of viewers are still tuning in to watch the programme. HBO said a record 18.4 million viewers across all its platforms watched last Sunday’s episode – the penultimate in the series.

The ending, as Mr Benioff and Mr Weiss have admitted themselves, was always likely to be contentious.

“A good story isn’t a good story if you have a bad ending,” Mr Benioff told Entertainment Weekly. “Of course we worry.”

The final episode of the fantasy drama is due to air this Sunday on HBO in the US, and in the early hours of Monday on Sky Atlantic in the UK.