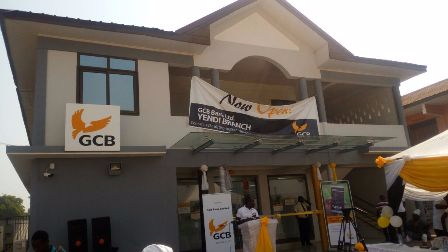 GCB Bank has presented a cheque for GHC21.5 million as dividend payment to government for the year ending 2016.

The total dividend amount is GHC100 million with a net profit of GHC440 million and a 25 percent dividend yield.

Receiving the cheque, the Minister of Finance, Ken Ofori-Atta expressed his gratitude to GCB Bank for the gesture and commended the Bank for the role it is playing in the Ghanaian economy.

The Honourable Minister noted that government’s One-District-One Factory policy and the bank’s One City One-Branch concept would help curtail rural and urban migration as well as increase productivity in rural areas for effective utilisation of available resources.

The Minister stated that GCB Bank will be supported with a means of getting lines of credit and urged management of the bank to be innovative to harness remittances, which could make a significant impact on the economy.

He hinted of a Diaspora bond and requested for further discussions with the bank on the issue.

The Managing Director (MD) for the GCB Bank, Anslem Ray Sowah presenting the cheque, thanked government for the creation of an enabling environment for banks to operate in the country.

He also indicated that Management of GCB Bank, would have wished to present a higher amount but expressed optimism that the Bank would either replicate or exceed the amount for 2017.

Present at the ceremony were Kwabena Adjei Mensah (Technical Advisor) and Anthony Dzadzra (Director for Revenue Policy Division) at Ministry of Finance.