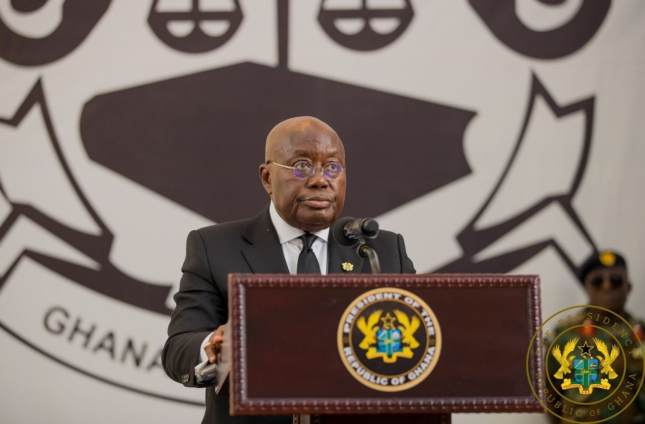 President Akufo-Addo has criticised persons who have recently accused the Supreme Court of being biased and politically inclined in its rulings.

Speaking at the Annual Conference of the Ghana Bar Association in Ho on Monday, the President said the criticisms are geared towards disparaging the image of the apex court for “selfish parochial partisan reasons.”

“These are the plaintiffs who go to court, indeed the Highest Court of the land, provide the skimpiest of evidence to back their claims and yet insist that their claims be upheld despite the elementary violation of the ancient common law rules for the discharge of the burden of proof that such a result would entail. It is no wonder that their claims were unanimously dismissed 7-0 by the apex court.

“The result of this case is indeed sharp contrast to the result of a similar one in 2013 when the unsuccessful plaintiffs managed to persuade four out of a nine-member court to fight for them and yet the earlier plaintiffs chose not to wage a political war against the courts.”

President Akufo-Addo noted that despite the comments against the Judiciary, “these attacks have not shaken the confidence of the people in these institutions.”

“Genuine democrats should devote their energies to finding ways and means of strengthening the democratic institutions instead of spending profitless time in undermining them,” the President urged persons who have been outraged by the rulings of the Supreme Court Judges.

Former President, John Mahama speaking at the NDC’s Lawyers’ Conference on Sunday, August 28, said it will take a new Chief Justice to repair the ‘broken image’ of the Judiciary.

The NDC’s 2020 Presidential Candidate said the current Judiciary has become an item of ridicule and mistrust, and therefore the need for a new Chief Justice to restore public confidence in the courts.

“There is, therefore, the urgent need for the Ghanaian Judiciary to work to win the trust and confidence of the citizenry and erase the widely held perception of hostility and political bias in legal proceedings at the highest courts of the land.

“Unfortunately, we have no hope that the current leadership of our Judiciary can lead such a process of change.

“We can only hope, that a new Chief Justice will lead the process to repair the broken image that our Judiciary has acquired over the last few years,” Mahama said.

The comment by John Mahama is what triggered a response from the President and the Attorney-General, Godfred Dame.

He described John Mahama’s attitude as deplorable and unbecoming of a former Head of State.

“My dismay is founded more on the fact that I am a lawyer and every lawyer ought to be concerned about these kinds of views expressed by a political leader in this country!,” he said.

DISCLAIMER: The Views, Comments, Opinions, Contributions and Statements made by Readers and Contributors on this platform do not necessarily represent the views or policy of Multimedia Group Limited.
Tags:
Akufo-Addo
Attorney General Godfred Dame
Chief Justice Anin-Yeboah
John Mahama