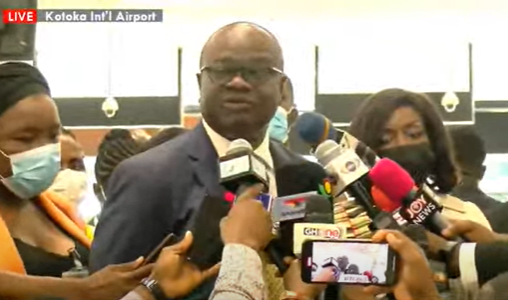 The Deputy Minister for Foreign Affairs, Kwaku Ampratwum-Sarpong, has touted the Akufo-Addo-led government’s progress in evacuating some Ghanaian citizens from Ukraine amidst tension in the region.

Interacting with the first batch of Ghanaians who arrived at the Kotoka International Airport (KIA) and the press on Tuesday morning, Mr Ampratwum-Sarpong noted that Ghana is the first country in Africa to have evacuated some of its nationals from Ukraine.

“Now there is one important thing we need to score. Information coming in indicates that Ghana is the first African country to have been able to evacuate some of their compatriots and students.”

“So at least, if not for anything at all, the government of Nana Akufo-Addo has scored first. We have to thank your leaders who have worked with our officials at the various missions to make it possible for you to get here today,” he added.

According to the Deputy Minister, the government has laid down plans to evacuate Ghanaians prepared to come home.

Such initiatives include partnership with Culture Airways and Turkish Airlines to fly home Ghanaians who have managed to leave Ukraine for neighbouring countries where they operate.

Mr Ampratwum-Saprong used the opportunity to thank the International Migration Organisation for the immense support provided.

He thanked God Almighty for the travelling mercies granted to the first batch of Ghanaians who arrived today.

“At the end of the day, you are here with us and we welcome you. We thank the almighty God that He has been with you and seen you through and brought you home and in the next couple of minutes or hours, you will reconcile and re-engage with your families.”

The Deputy Foreign Affairs Minister also reiterated that the government is “determined to continue to make sure that your colleagues who are still in transit to be evacuated will be eventually evacuated.”

He continued: “It is very important that we remember them in our prayers that the good Lord will deliver them safely to a safe shelter and eventually back home to Ghana.”

Meanwhile, Mr Ampratwum-Sarpong has revealed that Ghana on its part is doing its best to encourage Russia to stop the attack and the atrocities that are being meted out on the citizens of Ukraine.

DISCLAIMER: The Views, Comments, Opinions, Contributions and Statements made by Readers and Contributors on this platform do not necessarily represent the views or policy of Multimedia Group Limited.
Tags:
Deputy Foreign Affairs Minister
Kwaku Ampratwum-Sarpong
Ukraine