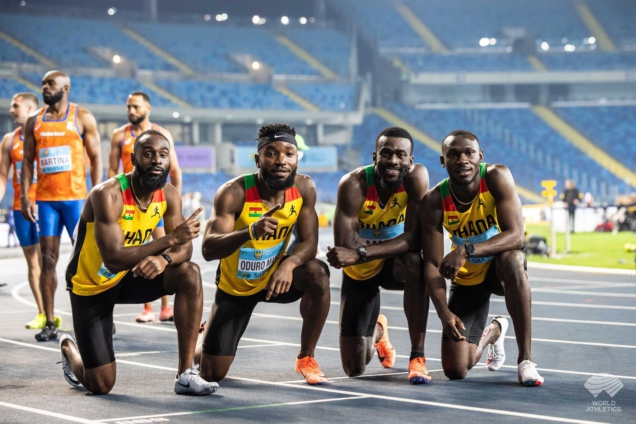 The quartet of Joseph Paul, Joseph Manu , Sean Safo Antwi and Benjamin Azamati simultaneously have qualified for the 2020 Olympics and the World Athletics Championship in Oregon

The team consisting of Sean Safo-Antwi, Bejamin Azamati, Joseph Paul Amoah and Joseph Manu secured their qualification after running a time of 38.79s – the second fastest in Heat 1 at this year’s World Relay championship in Poland.

The team which finished with the same time as the Dutch, had to settle for 2nd place after it was determined their European counterparts finished 8000th of a second ahead of the Ghanaians.

Ghana’s appearance at the World Athletics Championship in 2022 will be the second time since 2019, the West African country will be represented at the tournament.

However, the quartet of Azamati, Amoah, Manu and Safo-Antwi will be looking to do better than their semi-final finish at Doha two years ago. They were drawn with Jamaica, USA, Brazil and Great Britain for their heat.

The team also qualified for Tokyo 2020, making history in the process, booking Ghana a place in the relays for the first time since 2004 – 17 long years.

Their female counterparts however failed to qualify for Tokyo’s showpiece despite posting their season’s best time of 44.85s.