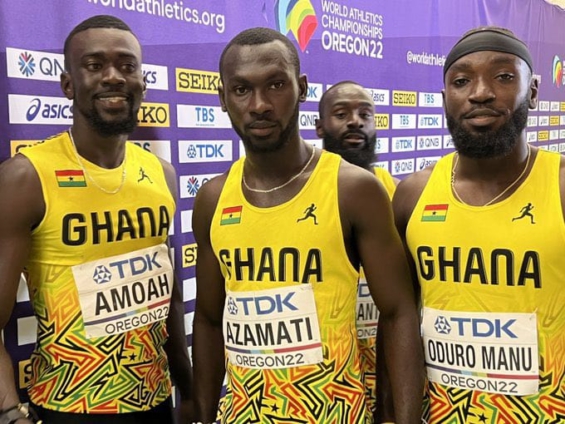 The Ghana 4x100m team has promised to win a gold medal for the country at the Commonwealth Games set to take place in Birmingham, United Kingdom later this month.

The quartet of Joseph Paul Amoah, Benjamin Azamati, Joseph Oduro-Manu and Sean Safo-Antwi blazed to a new national record (38.07s) at the World Athletics Championships on Saturday night in Oregon, USA, but missed out on a medal after finishing 5th behind Canada, USA, Great Britain and Jamaica.

It is the second time the quartet has broken the national record in the 4x100m relays in the last 12 months, having previously set the record at the Tokyo Olympics (38.08).

The team heads to the Commonwealth Games next, a competition scheduled for July 28-8 August, 2022.

• About setting a national record today at #Oregon2022
• Promise to bring back gold from the upcoming Commonwealth Games.

“I believe so,” said Safo-Antwi when asked if Birmingham represented a great chance for a medal.

Paul Amoah, who reproduced a blistering anchor leg in the final just as he did in the heats, was more cautious in his optimism but believes if they get the basics right, they will win a gold medal.

“In the relays, anything is possible. We know we have the talent and we know we can go faster. If we can get the baton around faster, we can make another national record, which I believe would then be good enough to give us the medal,” he said.