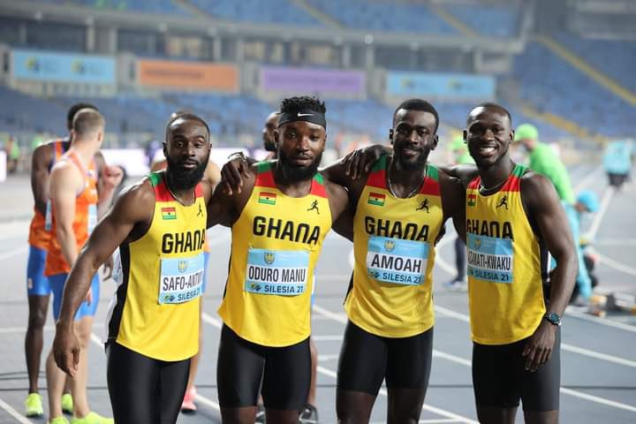 After disqualification from the final of the World Relays held in Poland, the CEO of the Ghana Olympic Committee, Bawa Fuseini has revealed plans to put the quartet into camping in order to smoothen out the nitty-gritties affecting their output.

Despite booking Ghana a place in the 4x100m relay event of the Olympics for the first time since 2004, their feat was somehow overshadowed when the quartet of Benjamin Azamati, Sean Safo-Antwi, Joseph Paul Amoah and Joseph Manu were disqualified albeit finishing third in the final of the World Relays. The disqualification followed a late changeover between Azamati and Manu.

Ever since their exploits in Doha, the quartet have not had any form of team training till their eventual reconvening in Poland for the World Relays. Fuseini highlighted the errors made by the team and indicated they need to spend more time together.

“The third athlete took off so early and he run across the exchange box so he took the baton out of the exchange box – that is around the 200 curve. He took off early so before Azamati got to him, he was already outside the exchange box. They need more time to practice. All these things are a result of a lack of practice, because they just got together about two days ago, if they had been practicing, even the ladies, if the ladies had been practicing, they could have also qualified to the finals,” Fuseini explained to Joy Sports.

As a result, the secretary-general has revealed plans to camp the team in Europe ahead of the Olympics.

“The plan that we have going forward is for them to have two months camping, so that they would be able to have enough time to have practice so these things will not happen. When the school goes on vacation at the end of May, we will necessarily have to move the team to Europe to camp them between June and July so that they will train together, practice together and they will get the exchange perfected before we get to the Olympic Games.”

The two months revealed by Bawa Fuseini as time scheduled to the 4x100m men’s relay team, will undoubtedly prove significant to a team that have time and time again, proven talent and potential are no longer things to be demanded of them – they have it aplenty.

So, it is now up to the Ministry of Youth and Sports, as well as the government of Ghana to provide the necessary funding and financial support to help Ghana finish in the medal places of the Olympics.