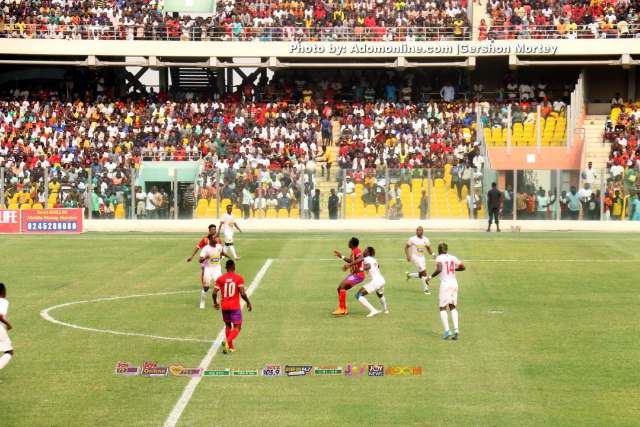 Asante Kotoko won the first Super Clash of the season as Legon Cities grabbed their first win this season.

Accra Great Olympics set a new record after their victory over Inter Allies.

Here are five things we learned from an enthralling weekend in the top-flight;

Super Clash lives up to expectations

The build-up to the game was incredible as the whole of Ghana eagerly anticipated kick-off. The match had everything from goals, drama, wild tackles to passion.

With all printed 37,000 tickets sold at the Accra Sports Stadium, the atmosphere was charged up as two of the biggest clubs in Ghana battled it out on the pitch.

Kotoko won the game at the death, but Ghana won the day as the matchday excitement demonstrated that there is hope for the league in terms of patronisation.

Yet to start a game, Cudjoe has had cameo appearances coming on as a second-half substitute in five of the six games played so far.

Against Ebusua Dwarfs, it was the 16-year-old who came off the bench to break the deadlock with seven minutes to go.

In the Super Clash, Cudjoe once again proved his worth after being introduced, attempting more dribbles and completing most take-ons than any other player. It was his effort that won the winning penalty for Kotoko.

After six matches, Goran BarjaktareviÄ‡ can finally afford to have a smile after Legon Cities registered their first win of the season.

The Royals hosted Bechem United at the Accra Sports Stadium in a Friday night encounter. A direct free-kick goal by Abdul Karim was the difference between the two sides.

With Legon Cities catching the eye so far with their marketing strides, a much-anticipated win will make the club believe that their investment will perhaps yield fruits.

Medeama get their mojo back

Medeama went into matchday six with the task of bouncing back after losing to Dreams FC the previous matchday.

The Yellow and Mauves were expected to challenge for the title and hosted fellow title contenders AshGold.

Having lost just one of their last eight Ghana Premier League home games against AshGold, confidence was high for Samuel Boadu’s team.

A second-half penalty from Prince Opoku Agyemang was enough to give Medeama the win on the day as they close the gap at the top.

Great Olympics are here to stay

After Olympics lost their first two games of the season, many thought they would end up being relegated.

However, there seems to have been a massive switch in terms of how Olympics have approached their last few games and as a result, are unbeaten in their last three games.

The latest success of Oly Dade was a home win against an Inter Allies side that had conceded at least once in each of their five matches this season.

A 1-0 victory for Olympics rewrote history as for the first time ever, they have won two consecutive matches in the Ghana Premier League for the very first time.

DISCLAIMER: The Views, Comments, Opinions, Contributions and Statements made by Readers and Contributors on this platform do not necessarily represent the views or policy of Multimedia Group Limited.
Tags:
GHPL
lessons
Matchday 6