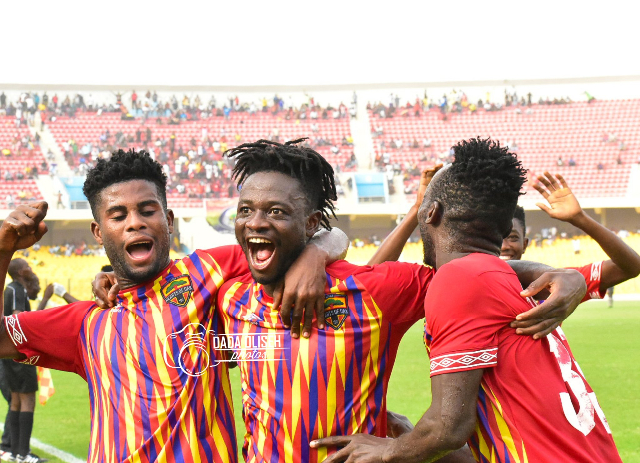 Accra Hearts of Oak scored in the final minutes against Bechem United to secure a crucial victory.

The top six teams dropped points as the league table becomes even tighter in terms of points.

Here are five things we learned from an entertaining weekend in the top-flight;

Asante Kotoko failed to score in a game for the fourth time this time season, showing their lack of cutting edge up front.

Sogne Yacouba who had been Kotoko’s leading marksman since last season is currently being frozen out of the squad due to contract issues.

Against AshGold, Kotoko were handed the best moment of the match and William Opoku failed to convert.

That has been the story of the Porcupine Warriors’ season so far. Maxwell Konadu will hope to improve his side’s finishing in the upcoming games.

Hearts of Oak back in title race

After a slow start, the Phobians have slowly re-emerged in the title discussions.

Prior to the Bechem game, Hearts had only won 4 points at home with majority of their points coming away from the Accra Sports Stadium.

With other results in matchday 10 going the way of Nii Odoom’s men, Hearts of Oak are now just three points off the table.

Title race getting ever tighter

Prior to matchday 10, five teams were joint top with 17 points. None of these five teams won over the weekend hence tightening the lead at the top.

Elmina Sharks who currently sit 11th on the table, are just 4 points away from the top of the table.

With a quarter of the season gone, it certainly looks as if the title race will go down to the wire.

Golden boot race looks set to go down the wire

Another race set to go down the wire is the golden boot race.

Most productive matchday so far

A feature of this season has been the number of goals scored so far. 190 goals have been scored in 90 games.

With an average of 2.11 goals per game, the Ghana Premier League is averaging the highest number of goals per game scored since the 2015 season.

Matchday 10 produced the most goals so far with 27 goals scored in nine games.