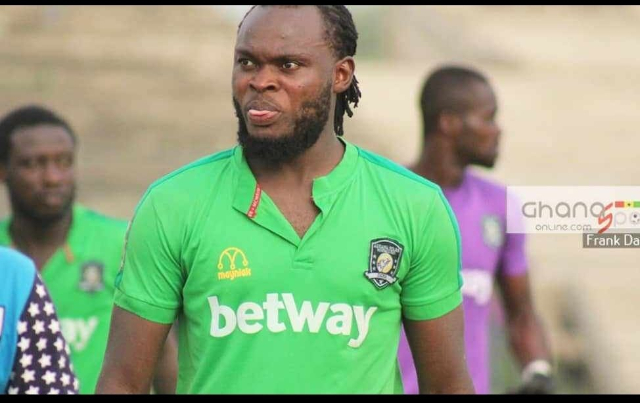 Aduana Stars striker Yahaya Mohammed admits his close competitor in the Ghana Premier League race Victorien Adebayor is giving him sleepless nights but he is enjoying the challenge.

The race to win the golden boot has become straightforward between the two attackers.

The Inter Allies captain scored a brace in a 3-1 win against Berekum Chelsea to take his tally to 10 goals on Saturday.

Yahaya Mohammed responded with a brace in Aduana Stars 5-2 defeat at Liberty Professionals to also move up to 10 goals for the season.

READ ALSO: How Inter Allies spotted and made Victorien Adebayor

Yahaya, who turned 32 on Sunday, took a commanding lead after netting a hat-trick on the first day of the season but Adebayor’s consistency has seen him catch up.

Medeama’s Prince Opoku Agyemang and Prince Kwabena Adu of Bechem United sit joint-third on the scorers’ chart with seven goals each while King Faisal’s Osman Ibrahim has six goals to his name.

In an interview with Joy Sports before his match on Sunday, Yahaya Mohammed said: “Yesterday he gave me sleepless nights because he scored two goals.”

“He is a very good player and he has to do more because he is a foreigner. When you travel outside there you cannot play the same way as the local players. You have to play about them because you have from outside, your everything, salary and treatment is different from the local players so what he is doing I understand him”

He added: “It’s a challenge and I like the challenge because it’s going to make me strong and competitive but we have a long way to go, there about 24 matches to go.”

Yahaya Mohammed has won the league three times – two with Kotoko and one with Aduana Stars in 2017.