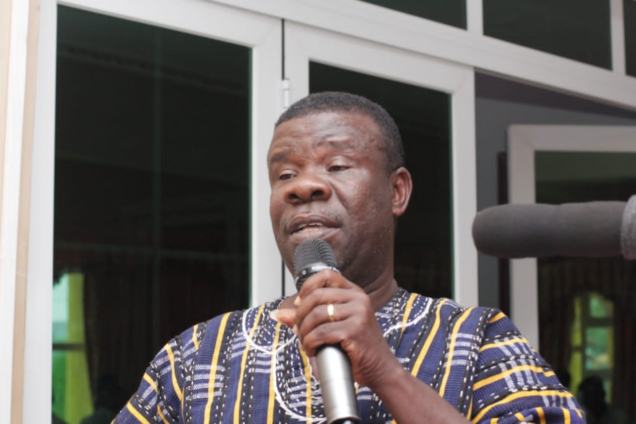 National Chairman of the Ghana Mineworkers Union, Mensah Kwarko Gyakari, has expressed displeasure about how some chiefs in mining communities are acting as recruitment agents to help people get jobs in the industry.

He also raised concerns about how communities are staging violent protests demanding that only indigenes should be employed, because the mines are in the towns, warning that the situation is a serious threat to security in the sector.

“There’s something happening in the mining industry of which I know many of you are not happy about; that idea that because the mine is in Akyem, therefore it’s only Akyems that must work there and the mine is in Obuasi and for that matter they have to work there”, said Mr. Gyakari at the Union’s National Executive Council Meeting held at New Abriem in the Eastern region.

“Where we are going now in the country, if we don’t handle this very well, a time will come that it will create a hell of a problem for us and for the government of this country”, he added.

The General Secretary of the GMWU, Abdul-Moomin Gbana, also said the security situation within mining communities and mining companies in particular continues to be a major worry for the union.

He warned that with the continuous security threat on the lives of members, the country risks serious industrial action across the mines.

“We expect that our social partners, the Ghana Chamber of Mines, must equally be weary of what is going on and it is extremely important that they are”, he said.

Mr. Moomin-Gbana added, “If not, it is better that we withdraw our services, protect our live rather than to sacrifice our lives in the line of our duties. And so we will withdraw our services if we witness any further incidences that threaten the lives of our people and it is not going to be about withdrawal of just one constituency or the other, but withdrawal of services across the mining industry.”

The GMWU National Executive meeting also afforded the members the opportunity to discuss development within the mining sector in relation to new forms of employment modules being forced down the throat of Ghanaian miners.

The meeting also deliberated on how to strategically position the investment wings of the GMWU to sustain the business and offer enhanced returns to members.

At the programme was the Deputy Secretary General of TUC, Joshua Ansah, who pledged the full support of the TUC to the GMWU in the face of deliberate attempt by management of some mining companies to undermine the Mineworkers’ Union and warned that the unity that Organised Labour demonstrated in the public sector workers demand for Cost of Living Allowance, COLA recently, may be resorted to, to get the mining companies to respect the country’s constitution and the labour laws.