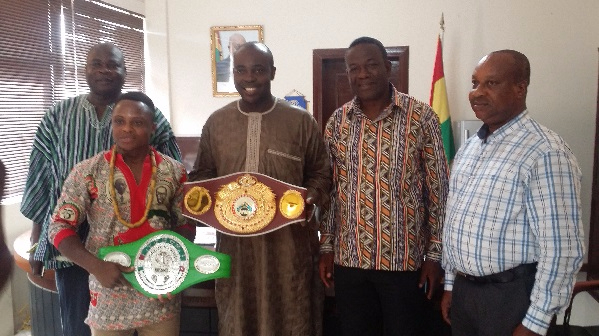 The Minister for Youth and Sports, Honourable Isaac Kwame Asiamah has reiterated the government’s commitment to ensure that all recognized sporting disciplines in the country receive equal support in furtherance of national sports development.

The Minister observed that aside football, other sporting disciplines have the potential to win laurels for the country hence the need for government to support their activities.

The Youth and Sports Minister made these remarks last Thursday when the WBO International Junior Featherweight champion, Isaac ‘Royal Storm’ Dogboe and his delegation called on him at the Ministry of Youth and Sports in Accra.

Dogboe during the visit, presented the WBO title he won in December 2016 to the Minister and also informed him of his upcoming world title fight against WBO world champion Jessie Magdaleno in Las Vegas on April 23.

Hon Asiamah congratulated the undefeated boxer (16-16 10TKO) for his incredible achievements as the youngest to be ranked in the WBO ratings as well as being adjudged by the same body as the 2016 best African fighter.

The Minister observed that boxing has been a traditional sport in Ghana which continues to show great potential with the likes of Dogboe taking over the mantle from legends such Azumah Nelson.

"We would do everything possible within our means to support you and make sure that boxing gets its fair share of the national cake all in effort to promote the once buzzing sport," Hon Asiamah said.

Isaac Dogboe expressed gratitude to the Minister for his vision for other sporting disciplines and promised to win a world title come April 23.

The ‘Royal Storm’ further pleaded with the Minister to help promotors stage international fights in Ghana, adding that "with the new state of the art gym, our country can host world title bouts of recognized sanctioned bodies".