Government urged to up stake in mining industry - MyJoyOnline.com

Government urged to up stake in mining industry 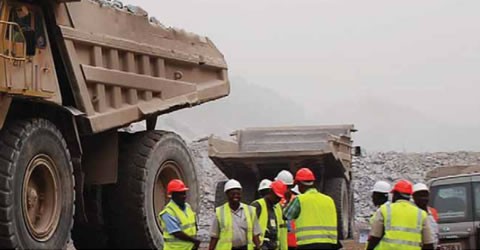 The Ghana Mineworkers’ Union has urged government to marshal the political courage to up the country’s stake in the mining industry.

The Union acknowledged that the Government of Guinea was taking bold steps in that direction, which other countries ought to follow suit.

A statement signed in Accra by Prince William Ankrah, General Secretary of the Union and copied to the Ghana News Agency on Thursday said only such bold political decisions could change the destinies of African countries.

It cited a report in the Mining Journal of September 2, 2011 which indicated that the National Council of Transition in Guinea had proposed ownership of 35 per cent in its mining companies after debate on the country’s mining code.

The Journal also reported that the code recommended a free participation level of 15 per cent for the Government and the right to buy an additional 20 per cent. In addition, a minimum investment of US$1.0 billion should be the basis upon which mining concessions would be awarded.

The statement said it was a clear manifestation of a country capable of dictating the pace on competitive international business landscape without succumbing to the manipulation and opportunistic characters of those who facilitate foreign direct investment into low income countries.

It noted that Sierra Leone had passed a law that compelled mining companies to set aside 0.5 per cent of revenue accrued from sale of their products into a development fund to be used in implementing Corporate Social Responsibility initiatives.

This approach was to ensure stability and mutual cooperation between the businesses and the communities, adding that development projects were implemented in an order of priority as agreed among the actors’.

It also revealed that Ghana had the lowest corporate tax rate in the sub-region.

In the view of the Ghana Mineworkers’ Union, these evidences were indeed worrying, since they denied the country of the much needed revenue required to revamp the economy.

The Union called on Ghana’s Parliament to emulate the bold initiative of Guinea and Sierra Leone to maximize the countries’ revenues from such a strategic sector of the economy.