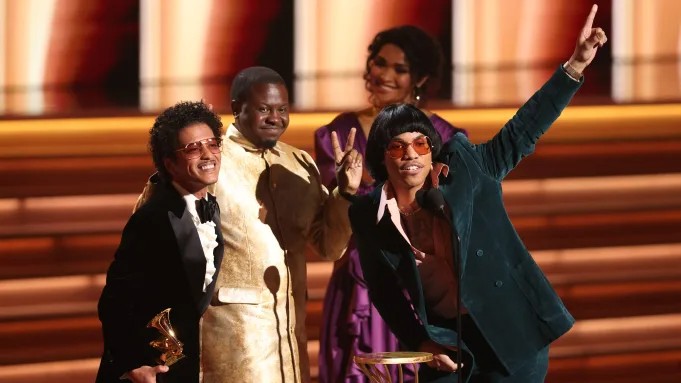 The Grammys, unlike the usually more-or-less accurately forecasted Oscars, are always full of surprises, this year hardly being any exception.

Jon Batiste receiving a leading five wins? Who saw that coming — except for anyone who saw him coming in with a leading 11 nominations and figured the math might translate?

But that arithmetic did not carry over for the highly nominated Billie Eilish and Lil Nas X, who went home empty-handed (but still full-hearted, let’s hope), or produce the results quite expected for Olivia Rodrigo and the Tony Bennett/Lady Gaga teaming.

Meanwhile, during the pre-telecast Premiere Ceremony presentation, live-streamed on the Recording Academy’s YouTube channel, there were other kinds of surprises including some seemingly honest confusion about given names and gender involving best new artist nominee and pre-telecast presenter Arlo Parks and veteran bluegrass picker (and pre-telecast winner) Bela Fleck. After all, the Grammys are one very, very long day for all involved.

Here’s a rundown of this year’s biggest snubs and surprises:

The duo of Bruno Mars and Anderson. Paak had the only perfect record of the night, at least among nominees with a significant number of turns at bat. “We are really trying our hardest to remain humble at this point,” said .Paak, “but in the industry we call that a clean sweep.”

They won in all four categories in which they were nominated: record of the year, song of the year, best R&B song and best R&B performance. If they’d been up for album of the year (Silk Sonic’s collection won’t be eligible till next year, because it came out after the Oct. 1 cutoff), they probably would have gotten that one, too.

So anyone who would prefer to see the love thrown around a little can be grateful for small favours, and that Silk Sonic will have some different categories to dominate in 2023.

In retrospect, Silk Sonic being Grammy bait shouldn’t have been as big a surprise as it was, given the way Bruno Mars swept with six wins when he was last up as a solo artist four years ago. (As a footnote, though, Silk Sonic did within one single vote of not getting that clean sweep, as the duo tied for R&B performance with Jazmine Sullivan.)

SNUB: No presenter calls Lil Nas X by his name

“Can’t believe I lost all my Grammys,” wrote the hip-hop artist on Twitter. “I am now no longer gay!” Here’s a man who not only doesn’t avoid the subject of his losses, he leans into it.

Of course, he still has his “Old Town Road” victories from two years ago to keep him warm. But any thought that Nas would be rewarded for coming out as boldly as he did were quickly set aside.

Even if he was never the leading candidate to win album or record of the year, how does he lose for music video when he had the water-cooler clip of the year with “Montero (Call Me By Your Name)”? That’s easy: He loses when that video stands in the way of the Recording Academy and its love affair with Jon Batiste.

Batiste didn’t “sweep” like Silk Sonic did. Even so, in winning less than half the categories he was up for, he was still the biggest winner of the night, because he came in with an astonishing 11 nominations and prevailed with five of those. That included the album of the year prize as well as some subcategories, like two wins for American roots, where he won over some performers who are far more associated with that genre.

“The creative arts are subjective,” he said in giving an acceptance speech for album of the year. And the Academy subjectively gave him a big, wet kiss. It was always a possibility Batiste would do this well, though.

In his night job as bandleader for Stephen Colbert, he’s worked directly with a large number of Academy voters and their teams, with positive interactions. He’s a symbol of genre agnosticism, despite his jazz chops.

“We Are” is nothing if not the feel-good album of the year, even for a lot of jazz-haters who just dig his R&B-pop chops. And, as Brandi Carlile told Variety on a red carpet this week (after collaborating with him on leadership of MusicCares’ Joni Mitchell tribute), “I loved working with Jon — he’s a true abstract, a true avant-garde and an absolute genius. He’s our generation’s Herbie Hancock.”

SNUB: Olivia Rodrigo is not this year’s Billie Eilish after all

As a teenager, Rodrigo should be thrilled by her three Grammys her first time out, and probably is. She was foreordained to win best new artist; no one lost their Grammy lottery by getting that one wrong. That’s phenomenal, right?

So calling this a “snub” may be a misnomer… except for the over-heightened expectations of just how much the commercial and critical phenomenon of her success might translate to a clean sweep of the top four categories, a la Eilish did two years ago.

But in the end, “Drivers License” did not prevail in record or song as widely predicted. Again, who would have guessed that a voting bloc still largely made up of thousands of middle-aged guys would not clutch a song about passing driver’s ed to their collective bosom?

SURPRISE: Voters haven’t cancelled Louis C.K., and are surprisingly unafraid to admit it

After four years of being embattled for sexual misconduct allegations that would have killed many another career, Louis C.K. is seemingly A-OK with the Academy and won for best comedy recording. Many will see this as voters turning a blind eye to one of the most flagrant examples of #MeToo the industry has seen… and as giving the Academy a black eye in turn.

If they gave an award for “most phenomenal performance on the Grammys,” the K-pop group would be up for it in 2023. But in lieu of anything like that, the seven members probably don’t care about losing out on a lone nomination again nearly as much as its massive fan base known as ARMY does. Bowling over a mass TV audience like they did Sunday night is its own reward.

But maybe Bieber is not as sanguine about going home empty-handed, as he and his team are known to have taken the Grammys seriously in the past. The institution certainly takes him a lot more seriously than it used to; he was up for seven awards this year (and tied for that amount with Doja Cat and H.E.R.), second only to Batiste’s 11.

Truth be told, Bieber wasn’t forecasted to win in any of the major categories; “Justice” was as strong an album as he’s ever made, but his primary competitors just had more interesting stories coming into the voting. Still, it’s gotta sting.

We’re going to go out on a limb here and guess that, even going 0-for-7, Billie Eilish doesn’t really care that she was shut out at the 2022 Grammys, after dominating the 2020 awards, after winning record of the year in 2021, and after just receiving an Oscar last week.

Not to underestimate anyone’s capacity for disappointment, but Eilish seems so grounded, and has been so rewarded, the phrase “happier than ever” might even still apply this week.

SURPRISE: A bigger look for country music on the show than in the nominations

Country music got a big snub when the nominations came out in November: Out of 40 possible nominations the genre could pick up in the top four general categories, country claimed only one — a nomination for Jimmie Allen as best new artist, which he was destined to lose to Rodrigo.

But watching the show, it was curious that the climactic moments were reserved for Carrie Underwood (who premiered a new single) and, finally, Brothers Osborne. Maybe this was the network’s way of reminding us that it is hosting the CMT Music Awards for the first time, in just eight days.

Regardless, it was a hell of a good night for Brothers Osborne, and not just because of that finale slot. Winning for country group/duo performance during the pre-telecast, singer TJ Osborne gave an emotional speech about how their winning song “Younger Me” was born out of his experience coming out as gay in 2021.

At the recent ACM Awards (also in Las Vegas), the brothers talked backstage about how their country radio airplay has been on the downswing, without blaming it on anyone factor. But their optics were in winning form at the Grammys.