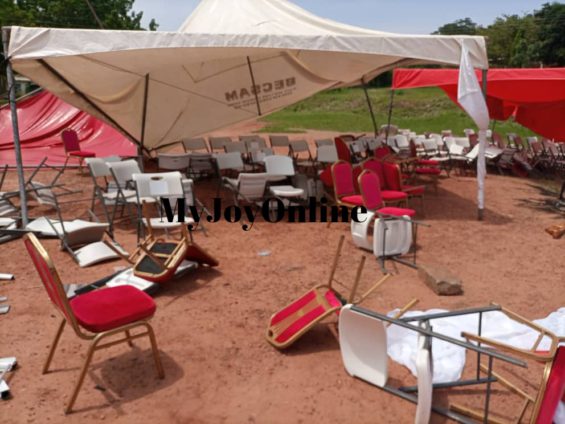 About 15 gun-wielding men on Saturday attacked and abducted the Divisional Chief of Piengua, Nene Oblisan Kaka Madokpo Tetteh Zogli III during a festival at Yokwanor in the Eastern region.

The chief and his elders were attacked when they were in a procession towards Yokwanor M/A Basic School Park for a durbar to climax the Ngmayem festival being observed by the people of the area.

The well-built men also carrying clubs and machete, attacked ten people after scattering chairs and tents at the durbar grounds amidst sporadic gunshots.

The injured chief and elders have lodged a formal complaint at the Odumase Krobo Police Station.

The Odumase Krobo District Police Commander, Superintendent Doris Akua Grant who confirmed the incident said the chief was later freed by the hoodlums.

She, however says the police are yet to make any arrest.

The case, according to the District Commander has been transferred to the Akosombo Divisional Police Command for further investigation.

The police, a few weeks ago averted a similar bloody attack during the launch of the Ngmayem festival by the Peingua Division after some angry youth stopped the chief from launching this year’s festival.

The chief who is among six divisional chiefs in the area, has had a sour relationship with the paramount chief after severing ties with him.

The divisional chiefs accused him of abuse of power and total disregard for traditional values.