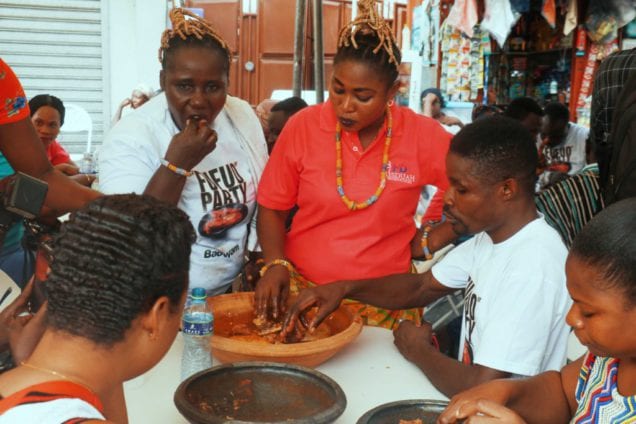 The busy schedule of the regular worker does not often allow home-cooked food.

Therefore, for convenience, many of the working population have resorted to buying food from street vendors.

However, a study carried out in Kumasi on fufu and fried rice sold on the streets, has revealed unsafe levels of aluminum, iron, and lead.

The research aimed at assessing the concentrations and associated health risks of the toxic metals in fufu and fried rice, the two commonly consumed street-vended foods in Ghana is published in a scientific journal – Scientific Africa.

The heavy metals investigated in the study were aluminum, iron, and lead.

Most metals cause diarrhea except lead which causes constipation. Long-term effects include an increased risk of getting cancer, among the many detrimental possible effects.

Some people cannot effectively excrete toxic heavy metals from their bodies due to chronic medical conditions such as kidney or liver disorders. Therefore, the metals build up in their bodies.

The main process by which heavy metals affect the body is by binding to certain parts of proteins, which make up enzymes, resulting in alterations in the activity of enzymes.

For the study, samples were taken from the cooked food of 18 selected vendors. Control samples taken were the uncooked food samples.

In fufu and soup samples, average levels of aluminum were higher than that of iron and lead in the same samples.

In both cases, aluminum, lead, and iron concentrations were generally much lower in the uncooked control samples.

The lead scientist, Dr. Gloria Mathanda Ankar-Brewoo said: “these heavy metals may have found their way into the food through cooking with locally manufactured cooking pots or from water used in cooking.”

Also, unhygienic and unsafe practices with regards to food preparation, such as the storage, and handling, may be associated with the presence of these heavy metals in food.

The scientist recommend that all utensils for cooking meet all recommended standards, such as replacing old pots (locally manufactured) and using stainless steel utensils.