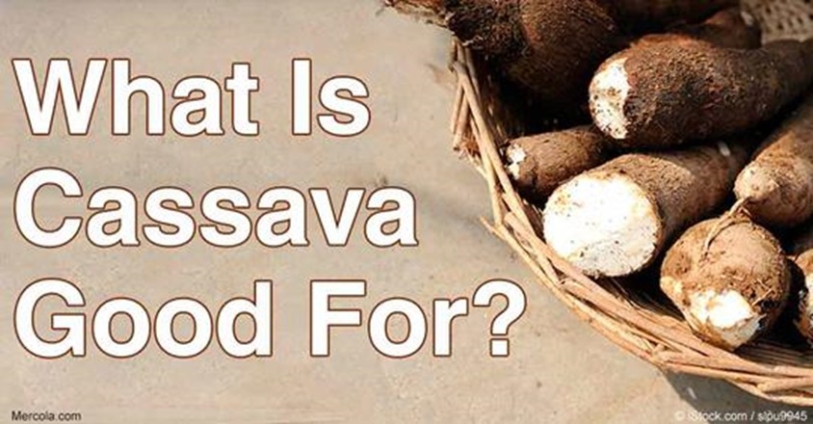 Recently, I wrote on the science behind Konkonte. In this current article, I provide further details based on science on foods related to Cassava such as Fufu and Gari. I found the need to address this as a result of some emails which I received on the glycemic index of local foods, especially for diabetics.

The fact is that traditionally made Ghanaian fufu can have cassava levels as high as 90%.

According to https://fdc.nal.usda.gov/(2020), a 3.5-ounce (100-gram) serving of cooked cassava root contains 191 calories. This means that 84% comes from carbs, while the rest comes from protein and fat. Additionally, one serving also provides some fiber and a few vitamins and minerals.

I provide a summary of the following nutrients present in 3.5 ounces (100 grams) of cooked cassava according to the U.S. Department of Agriculture (2020):

A recent study by Abdullah et al.(2022) is in agreement and found that Cassava root is mainly high in vitamin C, an important vitamin that acts as an antioxidant, supports collagen production and enhances immunity, among other benefits. The National Health Institute (2021) also found that cassava is rich in copper, a mineral necessary for neurotransmitter synthesis, energy production, iron metabolism, and more.

The study found that processed‐powdered fufu had the least glycemic response (31), followed by Ga kenkey (41) and locally pounded fufu (55), all recording low GI. Tuo Zaafi (68) had a medium GI and banku (73), had moderately high GI.

This means that processed fufu from the study has GI(31), locally prepared fufu has GI(51), and  Kenkey(41)(  Eli‐Cophie et al. 2017) and falls within this group. They can be consumed by diabetics.

Also, Tuo Zaa has GI(68) and can be moderately eaten by diabetics( Eli‐Cophie et al. 2017) with caution.

This is a red flag for diabetics. Interestingly, Banku failed the test here( Eli‐Cophie et al. 2017) and had a high GI (73). What could be deduced from the study is that the processing methods could indeed affect Banku, Kenkey, and other staple foods.

What is Glycemic Index?

GI is a classification of food based on the blood glucose response to a food relative to a standard glucose solution.  Low glycemic foods control the release of glucose into the bloodstream at a steady and sustained rate, keeping the body’s metabolic processes and energy levels balanced. People with low glycemic diets or [who] eat low glycemic foods are said to have a lower risk of getting coronary heart disease and type 2 diabetes. These food items that have low GI would benefit those who are already suffering from diabetes since these would help in the proper control and management of blood sugar.

This means that, as a low-GI food, eating cassava or fufu can also help improve physical endurance because blood glucose levels are moderated instead of dropping when insulin is produced. Low-GI foods also may help control triglyceride and other lipid levels in your blood. Cassava has even been called a “weight loss wonder food” due to its ability to decrease appetite and decrease fat storage in fat cells ( Kresser, 2014).

The Healthy Home Economist (2016) also calls cassava-resistant starch “the healthiest starch for your gut:” what does this mean to our health? They had this to say:

“Resistant starch is a type of starch that does not break down (it literally “resists” digestion), instead of being absorbed as glucose like most starches. Instead, resistant starch travels through the small intestine to the colon where it is turned into beneficial, energy-boosting, inflammation-squashing, and short-chain fatty acids by intestinal bacteria. The main reason why resistant starch is so beneficial is that it feeds the friendly bacteria in your colon, turns them into important short-chain fatty acids, such as butyrate (known to help reduce inflammation), and is extremely helpful in cases of autoimmunity, IBS, colitis, and allergies.

Most of the carbohydrates in the cassava diet are starches. Starches are long chains of glucose that are found in grains, potatoes, and various foods. But not all of the starch we eat gets digested. Sometimes a small part of it passes through the digestive tract unchanged. In other words, it is resistant to digestion.

There are four different types of resistant starch (Authority Nutrition 2016):

One study by Marandola et al.(2004) found that Cassava may also, by a different mechanism, be protective against cancer because it contains a chemical called tamarin which is responsible for the production of hydrocyanide. This tamarin has been shown in vitro to cause the death of cancer cells by self-toxicity with hydrocyanide. Another study by Tsumbu et al.(2011) found that Cassava Leaves, roots show promise against colon cancer. Irabor (2011) found that the low colon cancer in Nigeria could be due to the consumption of resistant starch foods.

According to fdc.nal.usda.gov, Cassava is loaded with vitamin C, with 20% of the Daily Value in each 3.5-ounce (100-gram) serving.  Other studies found that cassava provides about 50% of the daily vitamin C needs for most adults.

Vitamin C plays a key role in many aspects of health, including immunity. Carr and Maggini(2017) study found that vitamin C can help protect against oxidative stress and support the function of immune cells in your body.

Compare to potatoes, cassava is exceptionally high in potassium. A cup of cassava has 558 milligrams, providing 16% to 21% of the daily recommendation, which ranges between 2600–3400 milligrams per day depending on age and sex.

Filippini et al.(2020) study found that Potassium lowers blood pressure levels and can help balance out sodium intake which raises blood pressure. Choosing a cassava-based side dish instead of a grain-based one boosts the potassium intake of your meal.

Cassava is rich in flavonoids and fiber that can protect against the development of the metabolic syndrome and its associated complications. This claim is especially true when cassava replaces wheat as a staple food(Nwose et al.2017).

One may be mistaken for thinking that due to the high calories in cassava, it may not be appropriate for weight management. However, don’t forget that cassava provides fiber and resistant starch that promotes healthy gut bacteria.

This has been confirmed by Hiel et al.(2019) who found that the fiber from root vegetables reduces cravings for salty, sweet, and high-fat foods. The fiber in cassava also positively impacts the gut microbiome, promoting feelings of satiety.

U.S. Department of Agriculture (2020) found that Cassava contains 191 calories per 3.5-ounce (100-gram) serving, which is high compared with other root vegetables. If one juxtaposes the same institution work, you will notice that sweet potatoes have 90 calories, while the same amount of carrots has 35 calories. The high-calorie amount is what makes it a significant main crop in several countries. Be warned that eating too many calories than you burn can add to your weight gain( Osilla et al. 2021).

Two studies (Zidenga et al.2017; Cressey and    Reeve 2019) found that raw cassava contains chemicals called cyanogenic glycosides.  Hence, if one consumes it raw, it is likely to release cyanide into the body.

This notwithstanding, Odoemelam et al.(2020) study explain that because protein helps rid the body of cyanide, those with poor nutritional content and low protein faced these challenges.

However, these effects can be mitigated by Soaking and cooking cassava.  Additionally, we can also mitigate this by infusing cassava with other diets found to contain high protein (Alitubeera  et al. 2017; Odoemelam et al. 2020)

Another interesting thing is that the nutritional profile of cassava can be affected by processing such as peeling, chopping, and cooking.  However, a study by Julie et al.(2009) found that though cooking affects the nutritional content, cooking cassava before consumption is important to avoid side effects.

Julie et al. (2009) additionally found that boiling cassava root still retains more nutrients, compared with other cooking methods like roasting or frying. The exception is vitamin C, which is sensitive to heat and easily leaches into the water.

Due to the effect of some of the processing techniques which affect the nutritional content of Cassava. Agbon et al.(2010) found that cassava nutrients can be enriched with cowpea.

Another study by Osei-Djarbeng et al.(2016) used evaporated milk in the preparation of fufu and the soup. A ratio of 2:1 evaporated milk and water was used to prepare the food, and the soup was also prepared by using the same milk and groundnut paste to obtain a creamy soup that had chicken as the accompaniment. Eighty percent (80%) of the five food evaluation experts who assessed the food indicated that they extremely liked the product of the new recipe; the remaining 20% also liked the food very much. Preparation of the food with milk adds the rich nutrient components of the milk to the cassava which principally contains carbohydrates for some nutrients that may be lacking in the food.  Adding milk to the mainly carbohydrate-rich fufu is therefore highly recommended as this will make the food richer in nutrients required by the body. Furthermore, the study has shown that milk can be used in the preparation of main course meals apart from the normal beverages and light food in which the product is mainly used.

Additionally, Cassava fufu is loaded with 50% vitamin C, which boosts the immune system. It is further enriched with high Potassium which reduces high blood pressure.

Cassava should not be consumed raw but always cooked. Finally, assess your needs first and understands how your body responds to diet. There is no one size fits all approach to diet.

NB: Prof. Nyarkotey has strict sourcing guidelines and relies on peer-reviewed studies, academic research institutions, and medical associations to justify his write-ups. My articles are for educational purposes and do not serve as medical advice for diagnosis or treatment. I aim to educate and empower the general public to take control of their health by providing trustworthy or evidence-based scientific Natural Health Information and advocating for your right to make informed health decisions.

DISCLAIMER: The Views, Comments, Opinions, Contributions and Statements made by Readers and Contributors on this platform do not necessarily represent the views or policy of Multimedia Group Limited.
Tags:
blood pressure
Cassava
fufu
Immune system