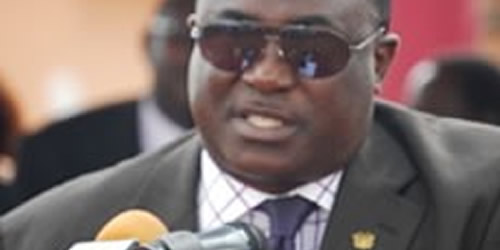 The Greater Accra Regional Minister says the security forces will not spare anybody who attempts to foment trouble ahead of the Homowo celebration in the Ga State.

Nii Laryea Afotey Agbo told Joy News nobody would be allowed to disturb the peace.

A new Ga Mantse has been installed under the stool name Nii Tackie Teiko Tsuru II at a time another Ga Mantse, Nii Adama Latse is already on the seat.

Latse's installation, two years ago, was also not without controversy.

With few days to go for the Ga Homowo celebration, it is unclear which of the two chiefs will lead the celebration.

Some king makers have filed a suit at the Accra High Court stopping the celebration.

A writ filed by Nii Tetteh Kwei II, Ga Dzaasetse, and five others is seeking to restrain Mayor of Accra Alfred Oko Vanderpuije from opening the palace for 16 others who are planning to perform various traditional rites including sprinkling of the traditional food, kpokpoi.

One of the sixteen, George Adama Tackie also known as Nii Adama Latse was installed two years ago as a Ga Mantse.

The Regional Minister welcomed the suit saying the court has the competence to rule on the matter.

"Whatever the outcome of the court is, [we will respect it]," he hinted, saying "I have no personal interest" in the matter

"Until the court comes out with a ruling no individual will spoil the peaceful atmosphere," he warned.

Nii Afotey Agbo said the new chief installed some few weeks ago under the stool name Tackie Teiko Tsuru II "is not known by us."

"I have in front of me the Gazette by the National House of chiefs and the name on it is Nii Adama Latse," he insisted.

He said with the knowledge and experience he has on the matter, the government will not spare anybody who attempts to misbehave.