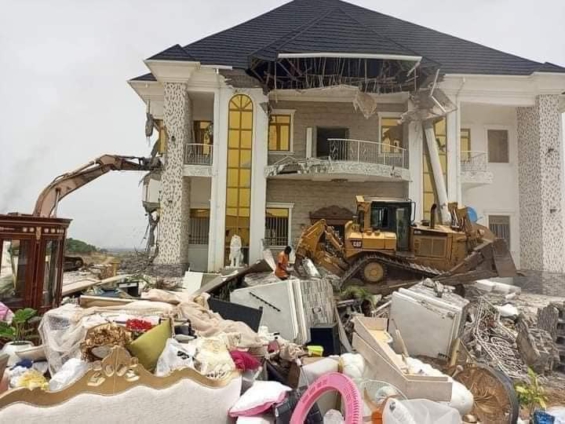 Actress, Tonto Dikeh’s ex-boyfriend, Prince Kpokpogri, has cried out after some officials of the Federal Capital Development Authority FCDA invaded his Abuja property.

The officials demolished the house on the morning of Saturday, May 14.

In the video he made, a distraught Mr Kpokpogri said the officials invaded his home without any prior notice.

He implied that the authorities had said that a road was to be constructed in that area and asked him to sell off his property.

He alleged that his refusal to sell the house led to the demolition.

He shared videos of caterpillars pulling down the walls of the apartment and vowed to get to the root of this recent development.

Reacting to the demolishing, Tonto Dikeh stated that she does not feel empathy for him.

She claimed that her ex-boyfriend tried to destroy her financially and emotionally and again threatened to release their sex tape.

“People need to understand that karma exist and I hope it’s not the last until he does the right thing,” she added in her post on Instagram.