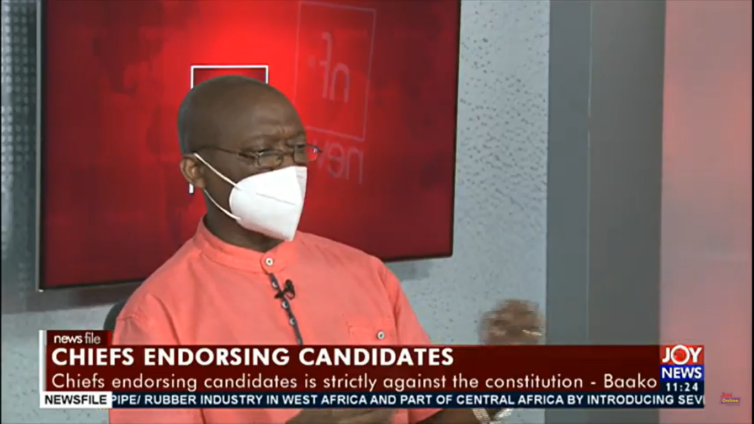 Editor-In-Chief of the New Crusading Guide, Kweku Baako Jnr has expressed worry over the growing phenomenon of traditional leaders endorsing political candidates especially ahead of the major elections.

Discussing the topic, ‘Chiefs Endorsing Candidates’ on Joy FM’s NewsFile Saturday, he said chiefs are leaders who unite their subjects, therefore when they publicly side with a party, it could bring division in their traditional area.

He also noted that the endorsement being performed by these traditional leaders are unconstitutional since the supreme law of the country clearly states that.

“So the chiefs are out there, running rout and misconducting themselves. I didn’t want to say, they have become a bunch of licensed irritants and it is about time they are told so in their faces.

“It doesn’t matter which chief; whether high, low, middle, it doesn’t matter the principle is non-negotiable. The constitution went to a referendum [and it was accepted so we have to abide by it],” he said.

Some chiefs have openly declared support for presidential candidates of some political parties in the country ahead of the December 7, elections.

Although people have criticised traditional leaders who have openly announced their favourite candidate, Executive Director of the Danquah Institute, Richard Ahiagba says chiefs are not engaging in active politics by endorsing political party candidates.

Mr Ahiagba insisted that one is engaging in active politics only when he/she is seeking political office.

However, referencing the Constitutional Review Commission, the New Crusading Guide Editor-In-Chief said openly approving a political candidate ahead of an elections also counts in active politics.

He said, “You must unify your community, so if you mount a political platform or if a party setups a durbar and you go there and go beyond acknowledging delivery of developmental projects to your community and asking for more and proceeding to endorse a candidate, whether a presidential or parliamentary one it is against the letter and spirit of this constitution.”