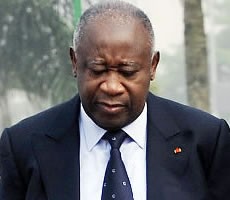 Prosecutors in Ivory Coast have charged former president Laurent Gbagbo and his wife, Simone, accusing them of economic crimes.

The charges include looting, armed robbery, and embezzlement.

Mr Gbagbo and his wife were arrested in April after a violent five-month election dispute in which about 3,000 people were killed.

They have been under house arrest in separate locations in the north of the country.

The BBC’s John James in Abidjan says the charges against the former president relate to the post-election period when Mr Gbagbo used state funds, including hundreds of millions of dollars from the central bank, in his attempt to stay in power.

He says that by charging them only with economic crimes, the prosecutor is leaving the way open for the International Criminal Court (ICC). The court’s judges are currently considering a request by the ICC prosecutor to open an investigation into the post-election violence.

The Ivorian government has requested the ICC’s involvement, saying it is not competent to judge the more serious allegations of violent crimes.

Authorities have arrested dozens of people who served under Mr Gbagbo. All except the former leader and his wife had already been charged.

Human rights groups had criticised the government for holding the pair for months without charge.

President Alassane Ouattara has insisted that those on both sides of the political divide would face justice.