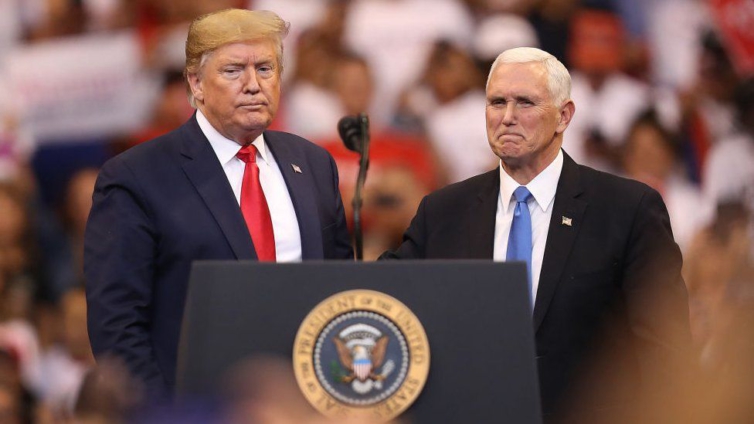 Ex-President Donald Trump put his Vice-President Mike Pence in danger during the Capitol riot as he illegally pressured him to quash the 2020 election, says a congressional panel.

The committee has accused Mr Trump of an attempted coup to remain in power.

Supporters of then-President Trump, a Republican, stormed Congress on 6 January 2021 in a bid to thwart certification of Joe Biden’s White House election victory.

Mr Trump has slammed the panel as a “kangaroo court” conceived to distract Americans from the “disaster” of Democratic governance ahead of November’s mid-term elections.

On Thursday, the Democratic-led committee focused in their third public hearing on the constitutional process by which presidents are elected.

Mr Trump had publicly made the claim – deemed bogus by legal scholars and Mr Pence’s aides – that vice-presidents have the power to halt the congressional certification of the election.

Greg Jacob, then-counsel to Mr Pence, testified to the committee that “our review of text, history and frankly just common sense” confirmed that his boss did not have the authority to overturn the election results.

He added that there was no way America’s Founding Fathers back in the 18th Century “would ever have put one person – particularly not a person who had a direct interest in the outcome – in a role to have a decisive impact on the outcome of the election”.

Michael Luttig, a former conservative judge and informal aide to Mr Pence, said that if the vice-president had followed Mr Trump’s orders “it would have plunged America into what I believe would have been tantamount to a revolution within a constitutional crisis in America”.

The hearing opened with footage of protesters at the Capitol chanting “hang Mike Pence” moments after Mr Trump called on his deputy in a speech outside the White House to do “the right thing”.

In earlier hearings, the panel said that aides who were with Mr Trump during the riot had heard him reacting approvingly – saying “he deserves it” – after he saw TV footage of his supporters chanting threats directed at Mr Pence.

Lawmakers on the panel argued that Mr Trump continued his pressure campaign – by tweeting that Mr Pence did not have the “courage” to intervene – even after he knew that rioters had broken into the Capitol.

“That courage put him in tremendous danger.”

Mr Pence was inside the halls of Congress as the rioters stormed the building. On Wednesday, photos emerged of him and his family sheltering with Secret Service agents as the mob raided the complex.

At one point only about 40ft (12m) separated Mr Pence from the rioters, said Democrat Pete Aguilar during Thursday’s hearing.

“I don’t think I was aware that they were as close as that,” responded Mr Jacob, who was in hiding with Mr Pence at the time.

Multiple aides to Mr Trump were shown in video testimony saying they heard the president hold a heated call with Mr Pence on the morning of the riot.

Julie Radford, who served as chief of staff to Ivanka Trump, said the president’s daughter told her that she heard Mr Trump call Mr Pence “the p-word”.

The committee also heard evidence that John Eastman, a conservative scholar central to Mr Trump’s claim about vice-presidential power, requested a pardon from Mr Trump before he left office.

The case against Mr Trump so far

There is absolutely no way a vice-president can legally reject the result of the presidential election. That may not seem like news.

So why are we listening to all this evidence about what legal advisers discussed and the pressure Mr Trump piled on Mr Pence to get him to change his mind?

It is part of the wider case the committee plans to make against the ex-president.

They want to demonstrate not just that Mr Trump inspired the violent attack on the Capitol on 6 January 2021, but that it was part of a wider conspiracy to illegally overturn the election result.

The select committee can’t try or convict Mr Trump. They can’t even bring criminal charges against him. But the attorney general can, and he has said he is watching these hearings closely.

It’s obvious that members of the committee think there is a case to answer.