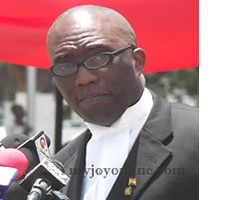 The controversy surrounding the $1.3 million judgment debt awarded to ISOFOTON SA, has taken a new twist with former Attorney General, Joe Ghartey, daring the local representative of the company to ‘spill the beans’ and expose NPP officials he claims have done wrong in the matter.

Mr. Ghartey says he is tired of the threats by Mr. Anane Forson that he has dirt on some former officials in the NPP government and will be forced to reveal their names and the full details of the deal if they continue to contest the resolution of the matter.

Speaking on Adom FM’s political talk show, Dea Me Hunu Wednesday, Mr. Anane Forson claimed that he was an NPP Constituency Chairman in the Biakoye constituency and feels slighted that the NPP abrogated his contract without cause and yet insists they did nothing wrong.

He said as far as ISOFOTON is concerned, the courts had ruled in their favour and the State is mandated to pay the $1.3million to them. He added that the State should even be grateful to him because the actual amount to be paid was $4 million including interest but out of patriotism, they have excluded the interest so as to reduce the amount to be paid.

The ISOFOTON representative warned the NPP to stay away from the efforts by the government to resolve the matter. “I have nothing against the NPP officials including Kojo Mpiani, he is my uncle but I don’t like how they are going about the issue,” he stated.

He accused the former Attorney General, Joe Ghartey of trying hard and failing woefully to justify their stance in the case adding that Mr Ghartey approached them in 2008 and pleaded for the withdrawal of the case from court to be resolved amicably outside of the legal system.

He warned that if pushed to the wall he will mention the former officials culpable in the deal and ISOFOTON will go back to court and demand all the accrued interest on the amount.

But speaking on Adom FM’s Midday News Thursday, Mr. Ghartey challenged Mr. Anane Forson to mention the names now or desist from issuing empty threats. “So what if he is an NPP member?” he angrily asked.

He said the NPP did not assume office to share contracts or money with party officials so after thorough scrutiny, they realized there was no merit in the demand of ISOFOTON.

He cited the AAL galloper as an example stating that even though the company was represented by Abuakwa South MP, Atta Akyea, the NPP did not just pay the money to him without the necessary due diligence but ensured that since the demand of AAL was without merit, the issue would be contested in court.

Mr Ghartey insisted that he has no fears of wrong doing whiles he was at the AG’s office and therefore warned Mr Anane Forson to either be sure to prove all the allegations he intends to make against him (Ghartey) or face legal action if he is maligned.