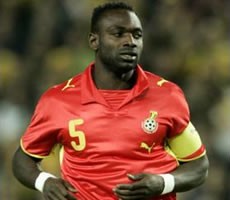 Black stars skipper John Mensah says he will be available for the Stars double header next month.

The senior national team will take on Swaziland at the Accra Sports Stadium on Friday, September 2 in the penultimate Group I second leg fixture of the 2012 African cup of nation’s qualifier before turning their attention to the friendly in London three days later against the Samba Boys of Brazil.

According to him, he has started training with his French side Olympique Lyon and is optimistic he will be available to lead the Black Stars to victory in the two games next month.

He told Asempa Sports that, the Swaziland game is more important to them since winning the game will help the team earn a place at the 2012 African Cup of Nations in Guinea and Equatorial Guinea.

John Mensah who has been out of action for three weeks believes the Black Stars players are ever ready to deliver.

He added that, the Brazilian game is also important to redeem their image after losing to the Samba Boys in the 2006 Germany World Cup and again in an international friendly in 2007. But he says the Black Stars have to focus on the Swazi game before travelling to London for the friendly.