Kofi Adams must relinquish one of his positions – Baby Ansaba 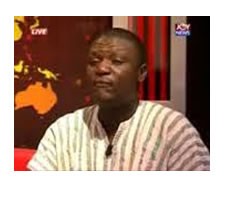 The Editor of New Punch newspaper, Ebenezer Ato Sam alias Baby Ansaba has urged the Deputy General Secretary of the ruling National Democratic Congress (NDC), Kofi Adams to renounce one of his positions to avoid conflict of interest.

He said it would be in the interest of Mr. Adams who also doubles as the Special Aide to ex-President Rawlings to resign one of the positions to avoid further problems.

Baby Ansaba was commenting on the supposed leaked tape which had a voice said to be that of Kofi Adams in a conversation with the Executive Director of policy think-tank Danquah Institute, Gabby Asare Otchere-Darko plotting the defeat of President John Mills in the December polls.

But Kofi Adams has vehemently denied, saying the voice is not his, adding the tape conversation is all attempts by his detractors to destroy his reputation.

He said Mr. Adams as the spokesperson for the Rawlingses and also a Deputy General Secretary must be seen to be neutral in the discharge of his duties which according to Ansaba is impossible.

Notwithstanding, the Punch Editor blamed Kofi Adams for bringing the problem upon himself-when as the General Secretary of the NDC; he was busily campaigning for Nana Konadu Agyeman Rawlings who lost the party’s presidential slot to President Mills at the Sunyani Congress.

“Instead of him working as the Deputy General Secretary and see to the re-election of the sitting President, he was working for the founders wife”.

Baby Ansaba said the only way to unravel the truth is for a voice expert to authenticate the voice to vindicate Mr. Adams.

Samuel Abu Jinapor, aide to the New Patriotic Party (NPP) flag-bearer, also a panelist on the programme challenged the authenticity of the tape and called on Ghanaians not to waste their precious time “on a bogus doctored tape”.

He noted if it turns out that Gabby’s phone was tapped, then it becomes a sensitive issue since the country’s laws frown upon tapping private conversations of individuals.