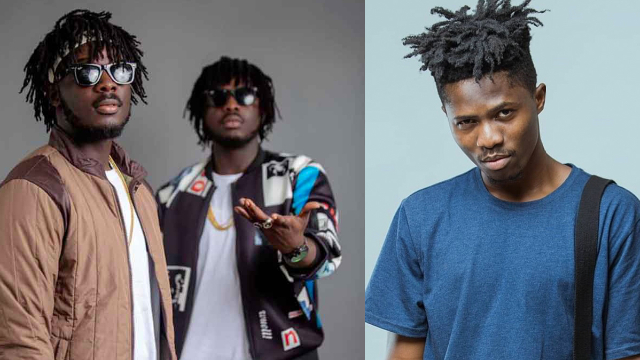 Just when Ghanaians hoped musicians were putting the age of feud behind them after the incident at the 2019 Vodafone Ghana Music Awards, another is gradually hitting a boiling point.

Music duo DopeNation has recorded a diss song targetted at rapper Kwesi Arthur, which was allegedly leaked from their camp.

In a video circulating online, the duo said Kwesi Arthur and his team stole their moment at a show in Ghana Telecom University College, Accra.

DopeNation said as the last act they were to climax the show and had been waiting for about three hours to do that.

However, when they were about to grace the stage, Kwesi Arthur and his team came from behind, pushed, elbowed and injured them and took the stage instead.

“Even if we were underground artiste, you have to give your boys respect,” Tony, a member of the group said.

The hurt, according to him, pushed them to record a diss song for the BET nominee.

The song, ‘Chairman’, they revealed was recorded about two weeks ago, the night of the event

“We had decided to release it the next day but upon some thinking, we just forgot about it,” Micheal, the other member of the group stated.

They said that they recorded the song just to advise the rapper to practice what he preaches in his songs.

The duo stressed the best way to get their message across “is to through our music.”

DopeNation added, “we were expecting an apology for a long time, so show respect to whoever respect is due.”