Mali ‘Spiderman’ to be made French citizen

A Malian migrant, hailed as a hero after mounting a daring rescue to save a small boy dangling from a balcony in Paris, is to be made a French citizen.

Mamoudou Gassama won widespread praise after climbing the outside of the building to save the four-year-old.

Video showed him being cheered on by spectators as he pulled himself from balcony to balcony to the fourth floor.

After meeting him at the Elysee Palace, President Emmanuel Macron said he would be made a naturalised citizen.

He personally thanked Mr Gassama, gave him a medal for courage and said he would also be offered a role in the fire service.

Mr Gassama is said to have arrived in France last year, taking the long and dangerous journey to Europe via a boat over the Mediterranean to Italy.

The drama that thrust him to fame unfolded on Saturday evening on a street in the north of the city.

Mr Gassama said he had been walking past when he saw a crowd gathered in front of the building.

He told Mr Macron: "I just didn't have time to think, I ran across the road to go and save him.

"I just climbed up and thank God, God helped me. The more I climbed the more I had the courage to climb up higher, that's it," he added.

He said that the boy was crying when he hauled him to safety and had also suffered an injured foot.

Firefighters arrived to find the child had already been rescued. 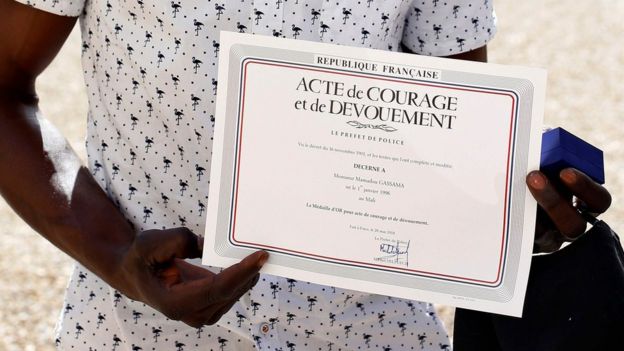 "Luckily, there was someone who was physically fit and who had the courage to go and get the child," a spokesperson said.

Local authorities quoted by French media said the boy's parents were not at home at the time.

The father has been questioned by police on suspicion of leaving his child unattended, judicial sources say. The mother was not in Paris at the time, it is believed.

Paris Mayor Anne Hidalgo was among those to praise the 22-year-old's heroism and said she had called him to thank him.

She referred to him as the "Spiderman of the 18th", referring to the Paris district where the rescue took place, calling him an "example for all citizens".

Mr Gassama's four-storey dash is a reminder of another Malian hero who gained national prominence in January 2015 during an extremist attack on a Jewish supermarket in Paris.

A young Malian employee, Lassana Bathily, was credited with saving the lives of six hostages including a baby when he led them to a safe hiding place, escaped, then directed gendarmes to their rescue.

Two weeks later – after six years of struggling to secure legal residency in France – Mr Bathily was given a medal and a French passport by then President François Hollande.

In 2016, he wrote a book ''Je ne suis pas un heros'' (I am no hero) and created a charity whose first project was to provide irrigation for his home village in western Mali.

Like Mr Bathily's selfless leadership to save the hostages, Mr Gassama's heroic climb to save the boy cements the image of Mali as a country with a culture of old-fashioned public spiritedness.