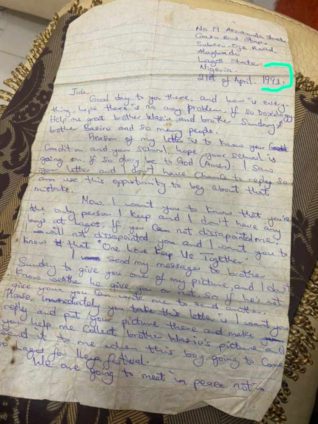 A young man has discovered a letter from his mother to her husband written 28 years ago pleading for mercy after wronging the love of her life.

The letter in question was shared by a Twitter user identified as @toladavids_ who found the note hilarious as a result of the terms used by his mother.

In the apology note, Tola’s mother referenced Onyeka Onwenu’s song ‘One Love,’ which must have been most predominant during this era.

Sharing the apology letter, the user wrote, “Mum wrote this letter to dad in 1993 to apologise for offending him …Can’t stop laughing.”