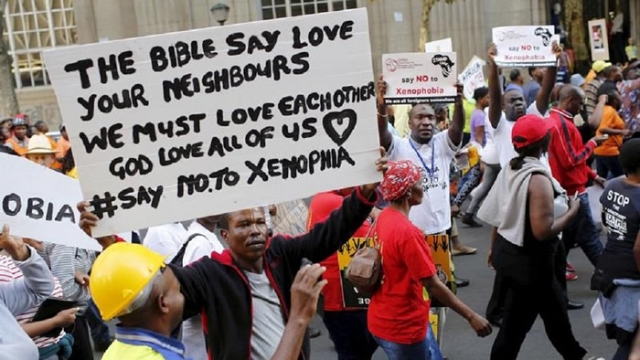 It is disgusting to hear repetitive xenophobic attacks targeted at migrants by their fellow blood year after year. In this modern era where almost every mind is trying to add up to the world’s solutions, others elsewhere are effortlessly adding up to the world’s problems. If in this 21st century you think your woes are due to others who came to seek greener pastures in your country, the fifteen century is where you belong!

If you can’t create opportunities migrants are creating for themselves, I am sorry to admit you have brought upon yourself your own troubles. If others are making gains in the same system you think is in shambles, then foreigners are not your setback. It is your crooked mindset!

I have always maintained that if blacks had been in the shoes of whites, we may have done worse than the despicable slave trade because we lambast them for being racist but at the least opportunity, we become very discriminative. On a good day, we are great tribalists. Even when we share the same skin color with others, we always find a way of making them feel inferior.

South Africa’s brute showmanship of savagery to their fellow blacks comes as a big surprise to the entire continent because these were the same people who stood behind them in their painful times of apartheid. South Africans tasted discrimination in all flavours and they knew how bitter it is. So, how could they dish out a similar dose to those who stood with them in their trying moments? Such ingratitude!

The big problem, however, is not South Africans but us”• all of us. How we treat foreigners (except whites) begs a lot of questions. What we say about them in their face points to the uncomfortable truth that those chasing our brothers in South Africa are not any different from us. If you discriminate against people because they don’t belong where you do, you have a tendency for xenophobia.

In the recent spate of kidnapping, we have all seen how the media has demonized Nigerians, especially. Remember how we treated Liberian refugees sometime back? And… that’s how xenophobia starts. When a bad image is created about a particular people, it is extremely hard to recognize their good deeds even if they do one.

When people do wrong, we must condemn their crime and make them face the full rigours of our laws. When they go against our set rules, they must be penalized as much or little as the law permits. It should not be a war against their nationality but a war against their crimes. We must not label an entire people with the wrongs a few of them have done.

When we lump people together and tag all of them as criminals, the crimes are never solved. Instead of blacklisting the criminal, we blacklist their nationality. We end up chasing after weed when the fire that is causing the forest to burn remains. If we want to solve problems created by migrants, we must deal with the crimes committed; not the nationality of those who committed the crime.

When we pass distasteful comments about people because they don’t belong here, we should remember a day may come that we will also be where we don’t belong. Every man is a traveller on a journey. That is why we need to be careful about how we treat those who come our way. Today, we may be the majority. Tomorrow, we may, unfortunately, be the minority elsewhere. Today, we may have the privilege of determining their destiny because they are in our homeland. Who, however, knows where we will be tomorrow!?

Any man can be a foreigner anywhere at any time. That is why we should be cautious about how we handle greener pastures seekers we come across. It could have been us in their place. When they do wrong, thus, we ought to take care not to hastily generalize that they are all as such. We need to tackle the problem, not the nationality.

The more we hastily tag a people by the faults of one of them, the more likely we are to be xenophobic. We may not yet be clubbing them down but it starts with how our mindset is formed about them. The more we feed the mind with thoughts of such people being evil, the more likely we will pounce on them all when we one day get fed up… like it is happening in South Africa.

Always remember, anybody can be the majority. Anybody can be the minority. Power can be in your hands today but tomorrow, it may be in the hands of another person. If you are the majority today, treat me as you would have had me treat you if I were the majority. Xenophobia starts when we feel others don’t deserve some privileges because they don’t belong where we do. Xenophobia stops when we feel others deserve every privilege as long as we all have the same blood running down our veins. We may be of different colors but one people we definitely are.

DISCLAIMER: The Views, Comments, Opinions, Contributions and Statements made by Readers and Contributors on this platform do not necessarily represent the views or policy of Multimedia Group Limited.
Tags:
Xenophobia