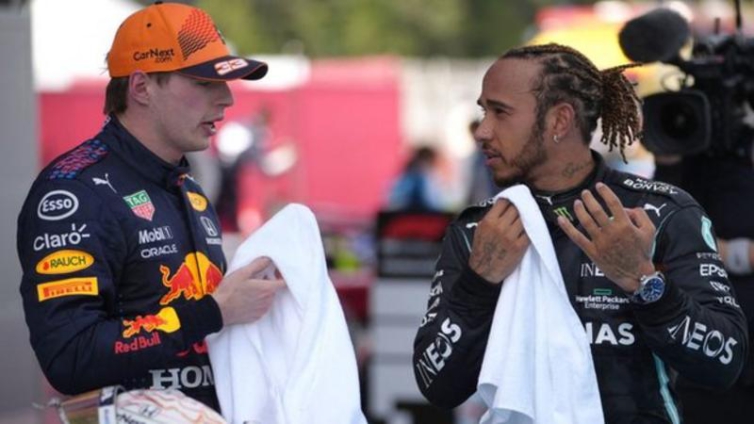 Lewis Hamilton says he believes Max Verstappen “feels perhaps he has a lot to prove” in their title fight.

The pair have had a number of near-misses racing wheel-to-wheel in 2021.

“I think I have done well to avoid all the incidents,” Hamilton said. “But we have 19 more [races] and we could connect. He feels he perhaps has a lot to prove. I’m not in the same boat.”

Verstappen responded: “I have nothing to prove and avoiding contact goes both ways. So we have done well.”

Speaking before this weekend’s Monaco Grand Prix, the Red Bull driver added: “We race hard, we avoided the contact both sides. Let’s hope we can keep doing that and keep racing hard against each other.”

Hamilton is going for a record eighth world title with Mercedes this year, and is 14 points clear of Verstappen after four races. The Dutchman is in his first genuine title battle.

Hamilton and Verstappen have fought wheel-to-wheel in every one of the four races so far this year and have come close to contact on a number of occasions.

In the first race in Bahrain, Verstappen went off the track when passing Hamilton for the lead around the outside in the closing stages of the race and had to give the position back.

Hamilton bounced over kerbs and damaged his car while trying unsuccessfully to fend off Verstappen at the first corner of the Emilia Romagna Grand Prix.

And Verstappen took the lead with an aggressive move down the inside at the start of the Spanish Grand Prix.

Hamilton said: “I am more long-term, it’s-a-marathon-not-a-sprint sort of mentality, which is ultimately why I have the stats I have. I will continue with that and do everything to make sure we avoid connecting.”

Hamilton has taken three wins and a second place so far in 2020, equalling his best ever start to a season in terms of results, and he said he believed he had “raised the bar” in the face of the challenge from Red Bull this season.

“Every year your goal is to extract everything,” Hamilton said. “There is never a year you arrive and say: ‘I am going to give a little bit less.’ Every year you give absolutely everything and sometimes things don’t go as planned. You could be distracted by certain things, you don’t capitalise on opportunities, you might not be always as complete as you’d like.

“This year that has not necessary been the case. It started out the way I wanted. I have adjusted to the disruption of the pandemic, how to maximise, I am fitter than I have ever been, as I have had more time to train and work on the mental aside and understanding the car.

“I think overall I have raised the bar in myself and it is our goal as a team to be able to do that.”

How will they go at Monaco?

Hamilton says he believes Red Bull “are going to be very, very hard to beat this weekend”.

He said: “This is a track that has always been strong for them and given how close the gap is between us, you can imagine this weekend they could be ahead. But we are gonna do everything we can to make sure that is not to be the case.”

Verstappen said: “We just need to make sure the car us working like we want it to work and then I am sure we will have a competitive car.”