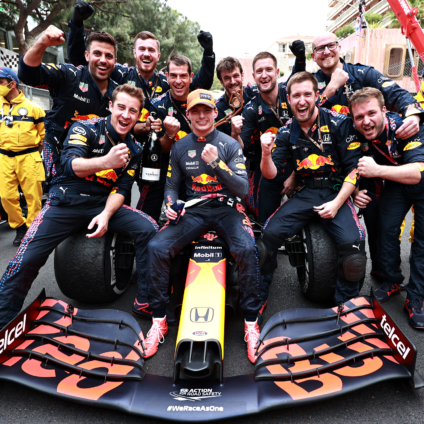 The Dutchman controlled the race after pole-sitter Charles Leclerc’s Ferrari broke down before the start.

He lost places to two drivers over the pit-stop period as Mercedes reversed their intended strategy.

Adding to a bad day for the world champions, Hamilton’s team-mate Valtteri Bottas retired when mechanics were unable to remove his right-front wheel at his pit stop when the wheel gun stripped the nut.

Bottas was running second to Verstappen but had been losing ground before his stop and his hopes of victory had evaporated and turned into concerns as to whether he could protect second place from Ferrari’s Carlos Sainz.

The Spaniard finished in a comfortable runners-up spot, with McLaren’s Lando Norris taking the final podium place, fending off late pressure from Red Bull’s Sergio Perez, who drove a strong race to recover from qualifying ninth.

Aston Martin’s Sebastian Vettel – who, along with Perez, passed Hamilton during the pit-stop period – was fifth, ahead of Alpha Tauri’s Pierre Gasly and the Briton, who made a late pit stop to secure the point for fastest lap.

Verstappen’s second victory in five races, coupled with a bad day for Mercedes, moved the Red Bull driver into a four-point championship lead, while Red Bull have taken first place in the constructors’ championship from Mercedes by one point.

It is the first time in his F1 career that Verstappen has led the world championship.