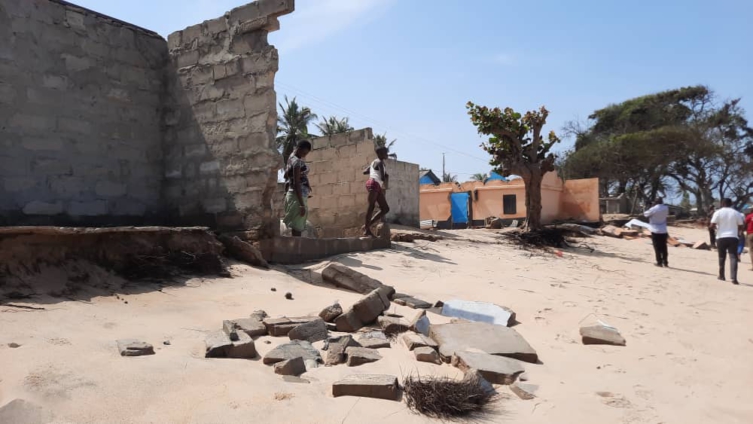 The National Disaster Management Organisation (NADMO) has revealed that more than 200 homes have been destroyed by the high tides that swept through some communities in the Volta Region.

“The data we got, we are having 200 to 300 houses affected. Then those who are displaced, most importantly, I hear they are about 4000, and that is quite a huge number. So the devastation for us is quite serious and we are giving it all the serious attention that is needed. The hardest hit I’m told, is the Keta area,” he told Maxwell Agbagba.

Mr Amedonu stated that he is assessing the damage to the homes to ascertain which ones can be salvaged or temporarily restored to serve as shelters for homeowners.

He, however, added that some residents have been given temporary shelter and safe havens while assessment is ongoing.

Some residents of Keta Municipality were rendered homeless after tidal waves swept through their homes on Sunday dawn.

This year’s waves have affected many households and individuals, displacing many residents and destroying fishing accoutrement, livestock, and other valuables.

Reacting to the incident, Member of Parliament for Ketu South, Dzifa Gomashie cautioned that if action is not taken at the earliest possible time, the effects of the waves will exceed what residents are currently experiencing.

Reacting to the concerns, the Minister for Works and Housing, Francis Asenso-Boakye, disclosed that the Finance Ministry will allocate funds for the construction of the second phase of the Keta sea defense wall.

Meanwhile, some residents who were displaced complained that days after the tragic incident, they are yet to receive the relief items.

But Mr Amedonu said that the plan of NADMO was not to immediately rush in with relief without first moving the people to safe zones and assessing the situation.

“We try to find out even what sort of relief items we need to bring in immediately and sometimes the people need to be moved to safer places and it is the job of NADMO in collaboration with the District Assemblies to get that done.”

The Municipal Chief Executive of the Ketu South Municipality also explained that NADMO is also mobilising before distributing the items.

Meanwhile, the Director-General of the National Disaster Management Organization (NADMO), Mr. Eric Nana Agyemang Prempeh has indicated that a team from his outfit has been deployed to Ketu South Municipality to present relief items to residents rendered homeless by recent tidal waves.

According to him, the team began an assessment of the situation and although they may not have the exact number of persons affected, NADMO is ready to distribute the relief items.

Speaking to JoyNews’ Seth Kwame Boateng, on the sidelines of COP26, in Glasgow he said that, “as we speak now, a team from my office is on its way with relief items to support the people of Ketu South. This is the immediate solution to the situation NADMO can offer.”

The MCE of the Keta also explained why NADMO delayed in providing relief items, “they were putting our things together to help the victims. With our place, because we are closer to the lagoon; we are able to pump the water from the ground into the lagoon, so our place is totally dry now. In Ketu South the NADMO officials are yet to get to the grounds with the relief items,” he said on Joy FM’s Top Story on Tuesday with Evans Mensah.

“The delay is from NADMO and I don’t want to blame anybody. They also have their challenges.  I don’t know why they delayed but they may be mobilizing their stuff before they provide it. They are distributing the items according to the districts. This is a national disaster, no one planned for it. We are appealing to everybody that can be of help,” he added

DISCLAIMER: The Views, Comments, Opinions, Contributions and Statements made by Readers and Contributors on this platform do not necessarily represent the views or policy of Multimedia Group Limited.
Tags:
NADMO
Tidal waves
Volta Region