MTN supports 100 persons with disability to be financially independent 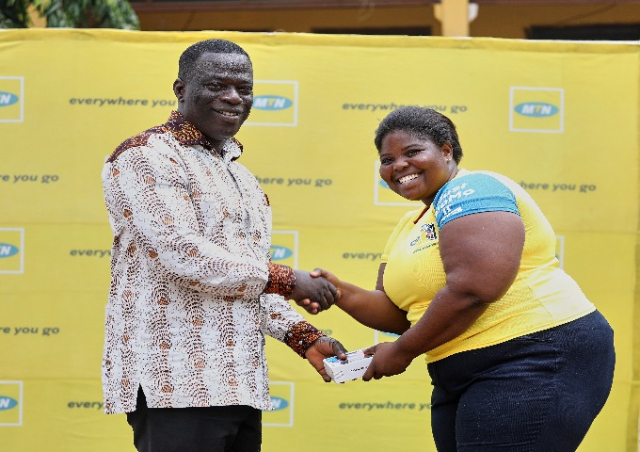 Mobile telecommunications giant, MTN Ghana has supported over 100 persons with disability (PWDs) to be financially independent.

The initiative through its Mobile Money (MoMo) service will see them get disability-friendly kiosks, mobile phones and startup capital of ¢4000 each.

General Manager of MTN Mobile Financial Services, Eli Hini, announced this at an event which took place at the Accra Rehabilitation Centre.

He emphasized the growing challenges existing among physically challenged persons stressing the dire need for an intervention.

“Aside from the fact that Mobile Money has been a great contributor to our financial inclusion agenda in Ghana, we have also seen a lot of jobs created. And a hundred of our friends (PWDs) are going to become part of that number.

“As a business, we understand the need to support, and there we have empowered directly in other projects including ‘MTN Heroes of Change’,” he added.

Ghana is estimated to have about one-fifth of its population being with either physical, intellectual, or emotional disability. This group of people have been subjected to maltreatment and/or discrimination.

Unemployment among persons with disability is increasing high due to multiple factors. Those who have attained education even on the higher level are not likely to get through job application processes successfully because of implicit thinking among employers.

According to Mr Hini, the initiative among other expanded programs to come will seek to relieve such economic bottlenecks among persons with disabilities.

Beneficiaries were awarded a start-up capital and other items to enable them to set up as mobile money agents, adding to its growing catalogue of 140,000 agents across Ghana.

The scheme comes after the 10 year anniversary celebration of MTN’s MoMo operation in Ghana.

The project, which is in partnership with the Ghana Federation of Disability, comes as a major contributor to make beneficiaries more self-reliant and reduce the tendency of overdependence on others for survival.

The event saw the patronage of Ignatius Baffour Awuah, Minister of Employment and Labour Relations, who lauded the company for the initiative.

He further entreated beneficiaries to be hardworking, diligent, focused and further urging the public to patronise their services without any discrimination.

He urged traditional and religious leaders, civil society, groups, the private sector and individuals to “add their voices to this cause ad advocate the provision of decent employment opportunities for PWDs”.

DISCLAIMER: The Views, Comments, Opinions, Contributions and Statements made by Readers and Contributors on this platform do not necessarily represent the views or policy of Multimedia Group Limited.
Tags:
MTN
PWD