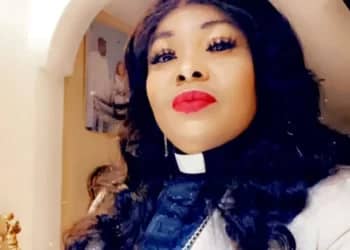 Embattled fetish priestess turned evangelist, Patricia Asiedu, alias ‘Agradaa’, has made her first appearance in church after she was granted bail over allegations of money doubling scam she perpetrated on some members of her congregation.

She held a thanksgiving service at her Heavenway Champions International Ministry, which was a closed-door service unlike her usual Sunday activities.

‘Nana Agradaa’ sang and ministered in a service which was streamed live on social media.

In a praise and worship song, the embattled evangelist thanked God for keeping her safe whilst in the grips of the Police.

According to her, she owes God all the adoration for keeping her safe and sound in the 40 days she spent behind bars.

“40 days in cells and nothing happened to me, so I say thank you God. I was behind bars but I was never poisoned or was there any attempt on my life, for these, I praise you,” she said with a loud voice.

‘Nana Agradaa’ also showed appreciation to people she claimed were on her side during her woes.

Despite the controversy over money doubling, the repented ‘sika gari’ fetish priestess urged her members who are in need of startup capital to grace her all-night service for assistance.

There were however a handful of members who attended church service on Sunday and there was no drama on the part of those who were allegedly scammed few weeks ago.

DISCLAIMER: The Views, Comments, Opinions, Contributions and Statements made by Readers and Contributors on this platform do not necessarily represent the views or policy of Multimedia Group Limited.
Tags:
Agradaa
Arrest