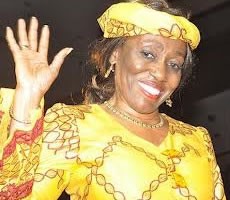 Addressing thousands of supporters at the Efua Sutherland Children’s park in a last minute push for votes, Nana Akufo-Addo said the endorsement was a boost for which he was grateful.

The former First Lady and her husband and founder of the governing National Democratic Congress (NDC), Jerry John Rawlings had had a frosty relationship with the NDC.

After failing to unseat late President John Atta Mills as the NDC’s presidential candidate for the 2012 election at the party’s Sunyani congress, she broke ranks with the NDC and accepted the flagbearership of the National Democratic Party.

The Electoral Commission however rejected her nomination forms on the basis that they were not properly filled out.

She nonetheless campaigned for parliamentary candidates of the NDP.

It was rumoured, Tuesday that she would declare her support for the NPP – something Nana Akufo-Addo claimed Wednesday evening she had done.

Efforts are currently being made to confirm the claim.