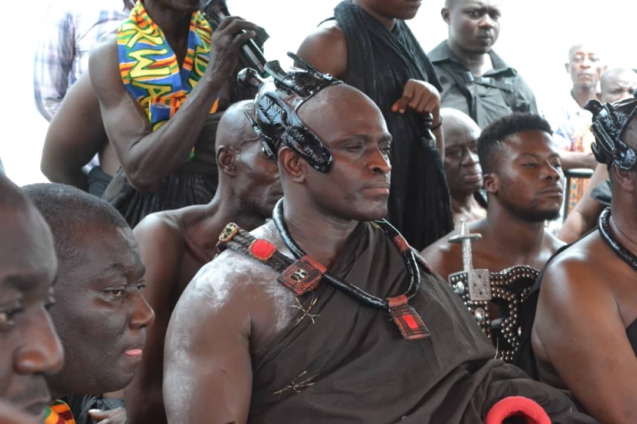 The new chief will become the overlord of the New Juaben State.

The traditional ceremony was attended by all the divisional and subdivisional chiefs, Muslim chiefs, political leaders and some members of government.

Omanhene Nana Kwaku Boateng lll was ushered in State by Gyaase and was introduced to New Juabenman as the Omanhene.

He was offered advise by all the divisional chiefs and the Omanhene of Old Juaben who grace the occasion.

For the first time in 29 years, the ‘Black Stool’ which symbolise the power and authority of the New Juaben People came out from the stool room.

Nana Kwaku Boateng lll was made to swear to the stool and commit to serve in diligence and in truth.

He later dressed in his regalia and sat in State.

All the Chiefs in New Juaben by customs and tradition also swear before Nana Kwaku Boateng lll and commit to serve him and the New Juaben Stool.

The Omanhene was carried in a palanquin and paraded in State and on the Principal Streets of Koforidua.

The Omanhene promised to serve his people in humility and help influence development of New Juaben.

The Omanhene will sit in State tomorrow and receive well wishers and love ones.

DISCLAIMER: The Views, Comments, Opinions, Contributions and Statements made by Readers and Contributors on this platform do not necessarily represent the views or policy of Multimedia Group Limited.
Tags:
Nana Kwaku Boateng lll
New Juaben Manhene