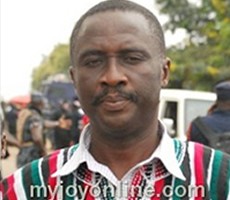 The controversial former MP said there was no coordination in the campaign to get President John Mahama re-elected.

He told several radio stations in Accra on Monday that “then the party’s activities regarding the campaign was not coordinated very well.”

“In fact, it was not coordinated at all, because we have a national campaign team but I never knew when they even attended meetings, not even for once.”

Mr. Nyaunu said, “We were just going on our ways like a pipe that is burst, flowing like that and not checking our back. I think that also didn’t augur well for us at all.”

He said the Montie 3 saga hurt the NDC campaign, saying “I think the clash of the executive arm and the judiciary in respect of the Montie 3 release was a factor in our defeat. The way in which we handled that issue offended the sensibility of a lot of Ghanaians.”

He also attributed the party’s massive defeat to what he called the disrespect the party’s gurus showed to people in their strongholds, especially the Volta Region which resulted in voter apathy.

“Why should we be taking Volta Region for granted when they have given us their support all these years,” he said, adding that“they deserve an apology at the national level. NDC must render an unqualified apology to Voltarians.”

He said, “The seed of the defeat was sown during our presidential and parliamentary primaries. They refused to allow people to contest the incumbent President.”

“Contesting the incumbent President would have brought the finest out of him and it would have also prepared others to take up the mantle when he exit but we made things extremely difficult so we lost that opportunity.”

He said some of the party’s bigwigs indulged in vote-buying and that brought in wrong candidates to represent the NDC.

“Money was in the hands of some popular people and these popular people happen to be the incumbent MPs and some of the Ministers. They were holding money and they were able to buy votes and influence people to vote for them but the reality on the ground was that they were not there for their constituents, they had distanced themselves and that culminated in the defeat of the President as well,” he said.

The opposition NPP’s candidate Nana Addo Dankwa Akufo-Addo made sure that President Mahama became a one-term President by securing 53.85% of the total valid votes as against the President’s 44.40%.

Apart from President Mahama’s humiliating defeat, the NDC also lost about 49 parliamentary seats to the NPP and are now going into the next dispensation as minority of Parliament with only 104 seats against the opposition’s 171.

Even when it was clear the NDC was heading to a crashing defeat, their leaders, including Kofi Adams, were in the media telling the party’s sympathizers that President Mahama was in a comfortable lead.