NDC will not go into opposition despite machinations - Prez Mills - MyJoyOnline.com

NDC will not go into opposition despite machinations – Prez Mills 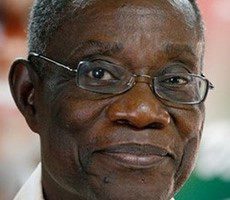 President John Evans Atta Mills has indicated that the record of the performance of his administration within the last three years will make Ghanaians retain him in power.

He said any individual or groups of people believing that the National Democratic Congress (NDC) party would go into opposition were clearly deluding themselves.

The President made the remarks at the Castle, Osu Tuesday in an apparent response to media reports that cited the Deputy General Secretary of the NDC, Kofi Adams, as having conversation on the possible defeat of the NDC in the 2012 elections.

“We will not go into opposition, whatever their plan, with God on our plan we shall succeed,” President Mills said.

A special aide to former President JJ Rawlings, Kofi Adams, has been cited in a scheme aimed at running the ruling National Democratic Congress (NDC) down in the 2012 general elections.

Mr Adams, who doubles as a Deputy General Secretary of the ruling party, was reported by Tuesday’s edition of the Ghanaian Lens to have vowed to ensure that the NDC lose the presidential polls, a claim Mr Adams has denied.

Mr Adams denied engaging in any such conversation, insisting that it was part of a scheme by people within his party to tarnish his image.

“Anyway, what is in the voice that is incriminating… it will not wash,” he insisted.

“ I even had phone call from President Mills after Sunyani. But l don’t recall anything about election 2012 or Kofi Adams saying anything to send the NDC to opposition.

“I have dealt with Kofi Adams on several occasions and he has always shown loyalty to NDC; I am utterly shocked. The voice does not sound like Kofi Adams I know.

“Recording telephone conversations of two private individuals is bad enough but to twist them for political ends is really not good.

This is the worst kind of invasion of privacy,” Mr Otchere Darko said.