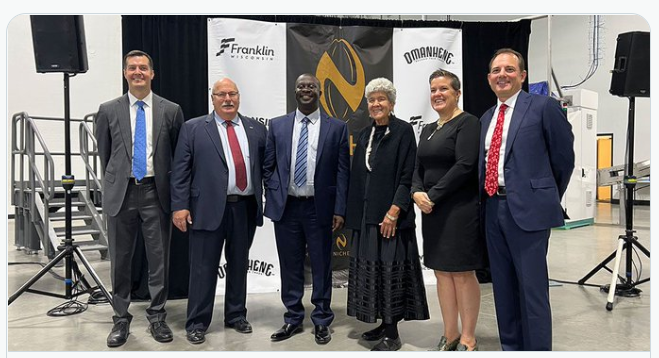 Ghana’s largest cocoa producer is building a new chocolate factory in Wisconsin, part of increasing economic cooperation between the West African nation and the United States.

Niche Cocoa Founder and CEO Edmund Poku told an October 4 launch event that the company selected Franklin, Wisconsin, for its new facility to improve access to U.S. markets and because of the Milwaukee suburb’s proximity to dairy producers.

“The U.S. became a natural choice for expansion, given the market size and potential, to develop both semi-finished products and also selling more products up the value chain such as chocolates,” Poku said, announcing plans for the facility, according to the Milwaukee Business Journal.

The $30 million, 4,000-square-meter facility is one of the largest investments by an African food and beverage company in the United States. The factory will process cocoa cake from Ghana into cocoa powder, which can combine with Wisconsin dairy to make chocolate drinks. “We can serve a lot of people, especially schoolchildren,” Poku said. “Once you produce the powder, there are a lot of milk factories already” in the area.

“We look forward to watching Niche Cocoa grow and thrive here as it shares Ghana’s delicious bounty with Americans and the world,” she said at the October 4 event.

The new facility will increase Niche’s access to U.S. markets and opportunities to partner with local businesses, while employing more than two dozen workers and adding to U.S. knowledge of chocolate production.

Ghana is the world’s second-largest cocoa-producing country after neighboring Côte d’Ivoire. Ghana’s exports to the United States totaled $1.7 billion in 2021. Cocoa, along with oil and gold, makes up much of that trade, according to the Office of the U.S. Trade Representative (USTR).

The United States invested $1.6 billion in Ghana in 2019, according to the USTR, with U.S. exports to Ghana totaling $840 million that year.

The United States is working to further cooperation with African nations, including Ghana. In April, the U.S. Embassy in Accra and the American Chamber of Commerce–Ghana launched the 2022 SelectUSA Summit recruiting program to attract Ghanaian companies interested in investing in the United States.

“The Summit will demonstrate the United States’ enduring commitment to Africa, and will underscore the importance of U.S.-Africa relations and increased cooperation,” Biden said in a statement.

DISCLAIMER: The Views, Comments, Opinions, Contributions and Statements made by Readers and Contributors on this platform do not necessarily represent the views or policy of Multimedia Group Limited.
Tags:
Edmund Poku
Franklin
Niche Cocoa