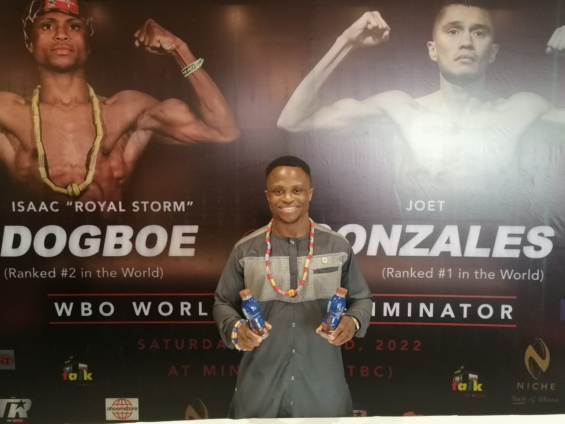 Isaac Dogboe’s preparation towards his crucial world title eliminator on July 23, has received a big boost with his unveiling as an ambassador for Niche Cocoa, an indigenous Ghanaian premium chocolate products brand.

By the deal, he will feature in commercials and communication campaigns in a deal that the company describes as one that will last a long time. Niche Cocoa, which has been known for its high-end chocolate products have now introduced cocoa beverages into the market and will have Dogboe use his brand to promote the line.

“We are prepared to support Isaac Dogboe with whatever he needs to get back to the top. He has worked hard and we identify with him as a Ghanaian brand that has quality and in wanting to go global, we see him as a worthy ambassador to help us achieve that,” Lloyd Ashiley, the CEO of Niche Cocoa Industry Limited told a news conference to announce the deal at the African Regent Hotel.

The Ghana Boxing Authority’s (GBA) President Abraham Kotei Neequaye, endorsed Dogboe as a good example for the younger generation of boxers. “I am very proud about this partnership because Dogboe has shown a lot of commitment to the GBA. If Niche Cocoa partners Isaac Dogboe, they have partnered the GBA. Dogboe started boxing development outside, yet at his high level, he has decided to pay a percentage purse to the GBA. He has decided to support development and this is commendable. We will pray for him and support him,” Mr Kotei Neequaye added.

Dogboe, who will mount the ring in a final eliminator against Joet Gonzalez in Minnesota, next month is on a mission to reclaim world title glory following the losses to Emmanuel Navarette in the super bantamweight division in 2018. Navarette currently holds the WBO featherweight title which both Dogboe and Gonzalez are aiming at.

“I thank God for this opportunity and many others that have come my way. I have always believed in the Ghanaian and African brand. It’s one thing using our resources to project ourselves to the rest of the world”

Dogboe is expected to be in the US in the next 24 hours to start his intensive training camp for this big fight which will have a big bearing on his ambition to become a two-time world champion.

Interestingly, both Dogboe and Gonzalez lost to Emmanuel Navarette in the super bantamweight and featherweight divisions respectively. The Ghanaian is currently the number two contender while the American is number one on the WBO’s rankings.

Dogboe has been successful so far in the featherweight division after moving up from the super bantamweight with wins against Chris Alvalos, Adam Lopez and Christopher Diaz.

Joet de Jesus Gonzalez is 28 and has 25 wins and two losses making up his professional record. He lost an opportunity to win the WBO featherweight title when he lost to Emmanuel Navarette in October last year. Following that loss, he stopped Jeo Santisima to win the WBO International featherweight belt in March this year.