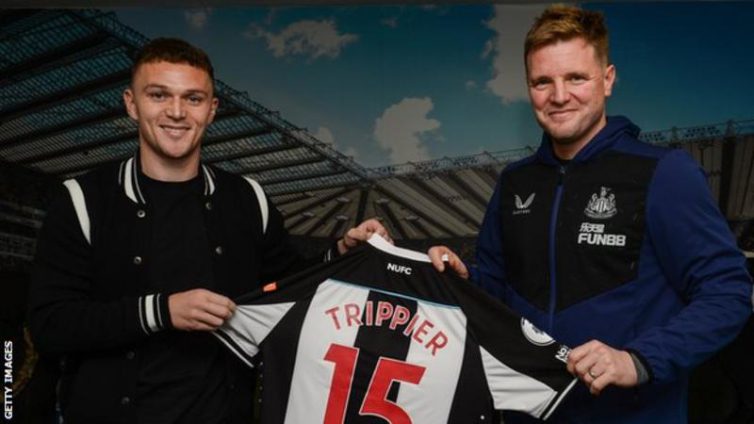 The 31-year-old is Newcastle’s first signing since a Saudi Arabian-backed takeover was completed in October.

“I’m delighted to be joining this fantastic club,” said Trippier, who has agreed a deal until the end of the 2023-24 season.

Trippier said: “I really enjoyed my time in Madrid, but when I became aware of interest from Newcastle United, and having worked with Eddie Howe before, I knew this was where I wanted to be.”

Trippier, who won the Spanish title with Atletico last season, had 18 months left on his contract.

Newcastle are second bottom of the Premier League, having won one league game this season.

“I’m aware there is a lot of work ahead of us but I know the demands of Premier League well and I know what an amazing club this is with very talented players,” said Trippier, who joined Atletico in 2019 after four years at Tottenham.

“I can’t wait to get started and I’m excited to step out at St James’ Park as a Newcastle player.”

Howe said he had “long admired” Trippier, adding: “When the opportunity arose to secure him, we didn’t hesitate.

“A lot of hard work has gone into planning for the January transfer window long before the month began, which is clear in how quickly we have been able to complete this move.”

I’m so happy to be joining Newcastle. Everyone knows the fans are unbelievably passionate and I will give my absolute all for them. I can’t wait to get to work 💪🏼

Thank you to everyone at @nufc & the fans for the very warm welcome I have received so far 🖤🤍 pic.twitter.com/6d0raRrpnv

Trippier, who was part of the Spurs side that reached the Champions League final in 2019, made 83 appearances for Atletico following his £20m move.

He made his England debut in 2017 and was part of the squad that reached the semi-finals of the 2018 World Cup and the final of European Championship last summer.

Newcastle host Cambridge United in the FA Cup third round on Saturday and fellow strugglers Watford in the Premier League on 15 January.