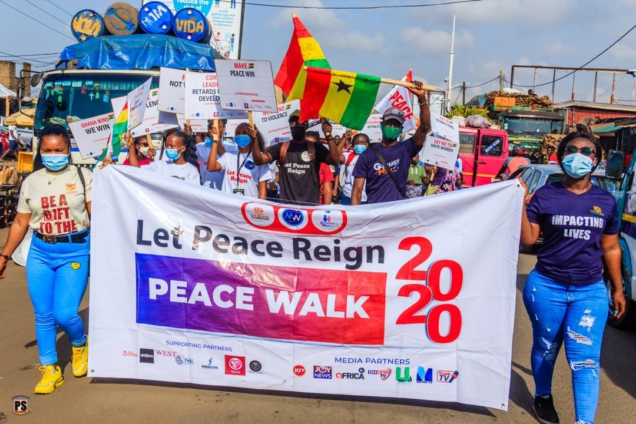 Give Me Hope Foundation in collaboration with other youth-led NGOs; Glimmer of Hope Foundation, Microwatch and supporting partners, have organised a peace campaign dubbed ‘Let Peace Reign 2020’.

This was geared at advocating for peace and active youth engagement before, during, and after the December 7, general elections.

Addressing the media at the launch in Agbogbloshie, they stressed that the youth make the majority in the country and play a major role in electoral peacebuilding.

Peace advocate and CEO of Give Me Hope Foundation Wisdom Dordoe said, “As youth-led organisations, we believe that young people have a crucial role to play in maintaining the peace we enjoy as well as meaningfully contributing to the electoral process.”

Ernestina Mensah CEO, Glimmer of Hope Foundation said, “Instead of being manipulated to fight for and be used by politicians, through this campaign, many young people should research, read the manifestos, engage candidates, step out in their numbers to vote as well as track their promises and hold them accountable”.

“The youth of Ghana has a lot to contribute and should be seen as resources and not problems. Give Me Hope Foundation and its partners would continue to set the young people’s development agenda and make the voice of the youth relevant in the corridors of power,” he stated.

One of the campaign’s peace ambassadors, Glady Biney expressed hope that manifestos will offer sustainable solutions to the many challenges face by the youth, particularly young women – unsafe abortions, unplanned pregnancies and sexual and gender-based violence.

“The peace campaign is an opportunity to strengthen the peacebuilding process to ensure a violent-free election as well as hearing the voices and views of young people from across Ghana and in the diaspora,” she said.

On her part, Nana Ama Anokye, another peace ambassador and member of Microwatch reiterated the need to involve young people in the quest to make the election a contest of ideas.

“More engagements are needed especially among young people in rural and hard to reach communities, discussing the urgency to mobilise, share ideas and contribute meaningfully to the upcoming elections and beyond, to promote social and community development as well as national progress,” the team indicated.

The NGOs also went along with Social Media Peace Campaign to seek to reduce the incidence of violence especially among youth while increasing youth voter turnout, encourage positive engagement with the political candidates on issues, mobilize commitments to and pledges for peace.

The collaborators expressed gratitude to the supporting partners, Sharing Hopes Foundation, Pato Suppressors foundation, Rising Icons international, Aunty Merkezi Foundation and the entire team for giving out their best in seeing the project through.

DISCLAIMER: The Views, Comments, Opinions, Contributions and Statements made by Readers and Contributors on this platform do not necessarily represent the views or policy of Multimedia Group Limited.
Tags:
Election 2020
Peace Walk