An evangelical Nicaraguan pastor and four followers have been sentenced to 30 years for burning a woman to death in a so-called exorcism ritual.

Vilma Trujillo, 25, died in February after being tied up and thrown on a fire.

The group had denied killing her and said she was possessed by the devil.

"The suffering that Trujillo was subjected to is something no human being should go through," said judge Alfredo Silva.

Pastor Juan Rocha, 23, plus his siblings Tomasa and Pedro Rocha, and Franklin Jarquin and Esneyda Orozco, were convicted of murder.

All but Orozco also received six years for illegal detention, although the judge capped the jail time to 30 years, according to local media. 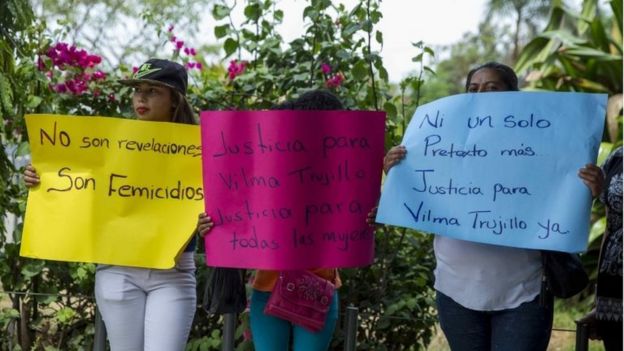 "They killed my wife, the mother of my two little ones. Now what am I going to tell them?" said the victim's husband, Reynaldo Peralta Rodriguez, just after her death.

Trujillo, from the rural north-west village of El Cortezal, died after a week in hospital, where she was taken to treat burns on 80% of her body.

None of the men showed any reaction as the sentences were read out, according to AFP news agency.

Women's rights groups have claimed the case is an example of fanaticism and misogyny.