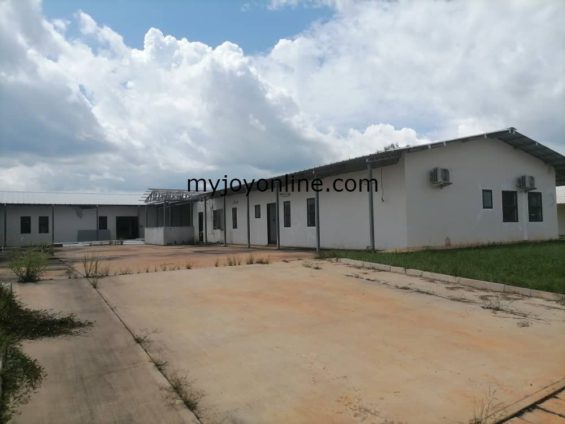 The Adansihene Mawerehene II, Nana Abu Takyi Korsah has called on the Akufo-Addo government to be thankful to the people of Fomena for not showing any violent disposition over the abandoned health facility in his area.

According to the Mawerehene, the non-completion of the facility could have led to heightened tensions in the area, a situation he believes could have caused unrest.

The 120-bed Fomena hospital facility intended to provide residents with access to quality healthcare has stalled since 2017 after the exit of the Mahama administration.

With funding already secured for it under the NMS Infrastructure valued at $175 million, construction works began in earnest only for it to stall after the NPP assumed the reins of power in 2017.

The abandoned project which would have served residents of the district and provided those within its catchment area with the needed medical care, is now at the mercy of the weather.

Most of the buildings have not seen an additional concrete block being added after work stalled in 2017, with some overgrown by weeds.

This has infuriated the chiefs and people of Adansi in the Adansi North District of the Ashanti Region who have impressed upon the Minority in Parliament to pile pressure on government to complete the abandoned health facility in the area.

“If residents were not peaceful, this situation would have degenerated and led to violent protests,” he said.

DISCLAIMER: The Views, Comments, Opinions, Contributions and Statements made by Readers and Contributors on this platform do not necessarily represent the views or policy of Multimedia Group Limited.
Tags:
Abandoned health facilities
Adansihene Mawerehene II
Fomena
Nana Abu Takyi Korsah